Prince William and Kate celebrate their anniversary today! Eight years ago, we were up at 4:00 AM to enjoy the festitivies!


Today Kensington Palace's twitter account, tweeted:  "8 years ago today - thank you for your lovely messages on The Duke and Duchess of Cambridge's wedding anniversary!"

On other social media, my Facebook memories to be exact, this popped up today: "Who would think getting up at 4:30 am would be so much fun! When it's with your favorite daughter and the royals, how can you miss?"

(Never mind my eldest son's goofy comment: "I thought I was your favorite daughter." Mommy Dearest responded, "I'll tell you what, you put on a dress, pearls and heels at the crack of dawn and watch two hours of royal wedding festivities and then we'll talk."  That went unchallenged.)

But that  Facebook memory sent me to dust off my own archived albums from April, 2011 and find the photos of how Rachel - truly my favorite daughter!  - and I spent Prince William and (then) Kate Middleton's wedding day.


In 2011, Rachel was a junior at Michigan State University and there was tea room, The Wanderers, on Grand River, right across the street from campus, where we spent many a weekend visit. On once such visit,  the owners notified us of their special live-stream wedding day tea event which was to start at 4:30 AM on April 29th.

I was "in" and Rachel went along for the ride. In order to get to the tea room at such an early hour, we booked a stay at a nearby bed and breakfast and set the alarm for 3:45. We showered, coiffed,  put on our fancy dresses and walked across a dimly lit parking lot at 4:25 -  in heels -  to The Wanderers.

Once inside, we were met with other fanatic Royal-philes - some also attired in gowns and tiara's while others came in loungewear or pj's.


As we watched Kate appear in her elegant, white-laced dress while Prince Harry snuck an approving glance and affectionately nudged the groom, the tea room was filled with excitement and edible goodies. It was one of my best MSU memories with my favorite Sparty (and, just to be clear, both my sons graduated from Wayne State.)

Comparing photos of William and Kate alongside those of Rachel and I from eight years ago today, I think three of the four of us could still fit in the attire they donned on April 29, 2011. (hint: I am no longer a size 8).

More royal-themed memories were to be made later that summer when Rachel and I visited London again, this time while she did a study abroad. Among many of the places we visited was Kensington Palace, now home to William, Kate, and their three children.

Great memories of a special day for many of us. Back home, I brought out the William and Kate tea towel, royal wedding tea and Wedgwood cups to toast the occasion.

Soon, we'll be celebrating another Royal Wedding anniversary - and, yes, just like you - I know exactly where I was and what I was doing. We'll share those memories in a couple of weeks.

In the meantime, Happy Anniversary to William and Kate and cheers to all of us who shared that special day!

There are many must-do's when visiting New Orleans, but three were told to us repeatedly:  taking in live jazz, parading down Bourbon Street and sampling beignets at Café du Monde. While we did all three earlier this month (and more!) on our visit to NOLA, our stop at Café du Monde was by far the most delicious! 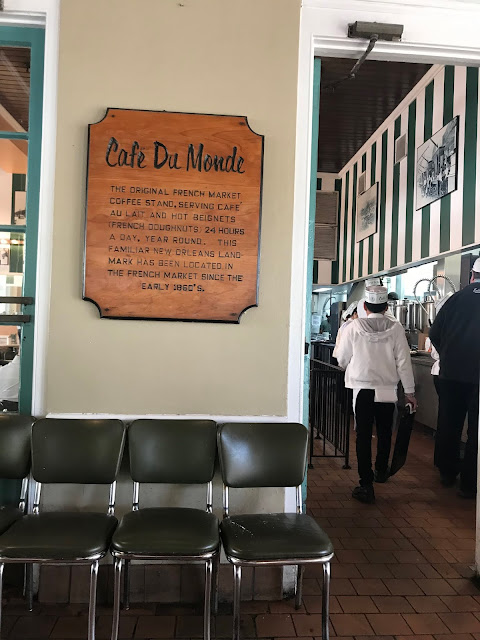 A main staple in NOLA's French Quarter, the Café du Monde has been serving it's limited, but scrumptious, menu since 1862. With very few additions to their menu, (iced coffee and soft drinks were added in 1988), the café offers coffee made with chicory - served black or with warm milk - orange juice, white or chocolate milk and - the piece du resistance! - the beignet!


The beignet is a plain, square French doughnut heaped with powdered sugar (you'll need more than one napkin). Served up warm and quick to your table, one bite tells you why visitors line up day and night (it is open 24 hours) to indulge in this, quite literally, "hot mess".


Although the experience of sipping café au lait and warm doughnuts in an open café, with rotating jazz bands playing just outside it's borders can never be replicated back in our home in Michigan, I did purchase some beignet mix to at least bring back some of the NOLA flavor.


The French spelling may throw you off, but it's correct pronunciation says it all: Beign -YAY!, indeed!

Puttin' on the Ritz: Afternoon tea and all that jazz at the Ritz-Carlton in New Orleans

"If you like blues and afternoon tea, I know where you can go and where one sits, Puttin' on the (NOLA) Ritz!"

Although we're taking a some liberties with the classic Irving Berlin tune, "Puttin' on the Ritz", we're here to seriously exclaim, the Ritz-Carlton in New Orleans is the place for jazz AND afternoon tea.  Two weeks ago,  we had the good fortune to experience both.

The Davenport Lounge in the New Orlean's Ritz-Carlton is the home to elegant afternoon teas by day and a boisterous jazz club by night. Because we made the Ritz our home-away-from-home for a week with our good friends, Pam and Quint, we had easy access to the lounge's duel personalities and took advantage of both.

Our first full day in New Orleans, we had afternoon tea at the Ritz. The luxury hotel serves tea two times daily (11:00 am and 1:00 pm) and we had made reservations for the first seating. A traditional hotel lobby venue with sumptuous rose velvet sofas and cushy green brocade chairs around a low, glass oval table, the afternoon tea fare was a welcomed twist on classic offerings of scones, savories and sweets.

The savories included gourmet tiny bites of smoked salmon mousse in a cucumber cup and roasted fig and goat cheese on a thyme blini - all as delicious as unexpected. More "foodie" than "Southern" - not that there's anything wrong with that - the only nod on the menu to the region was the creole deviled egg and caviar.

The scones were bite-sized as well, biscuit-like and very tasty, served up with jam, lemon curd and cream.

The grand finale was the pastry tray, featuring two tarts (lemongrass passion and chocolate), an orange tea cake and a chocolate caramelia éclair. The presentation was impressive with candied flowers, chocolate shavings and raspberry hearts.

We shared a few pots of Earl Grey, which was served in teapots tagged with descriptions of the tea inside.

Afternoon tea at the New Orleans' Ritz Carlton was a wonderful way to start our week in the Big Easy. When we returned home from our daily excursions, we'd head back to the Davenport Lounge and participate in its evening "alter ego" nightclub, replacing Earl Grey with Sazeracs and listening to live jazz on stage.

Even better, we continued our ritz-y lifestyle back in our lovely accommodations overlooking the hotel's courtyard.

It's always a treat to take a break from the routine, put on the glass slippers and go to the ball. We thoroughly enjoyed our stay at the Ritz-Carlton, afternoon tea, jazz and ALL!  We're ready to go back anytime.

"Come with me, to afternoon tea, jazz and more, waiting through the doors, Puttin' on the (New Orleans) Ritz!" 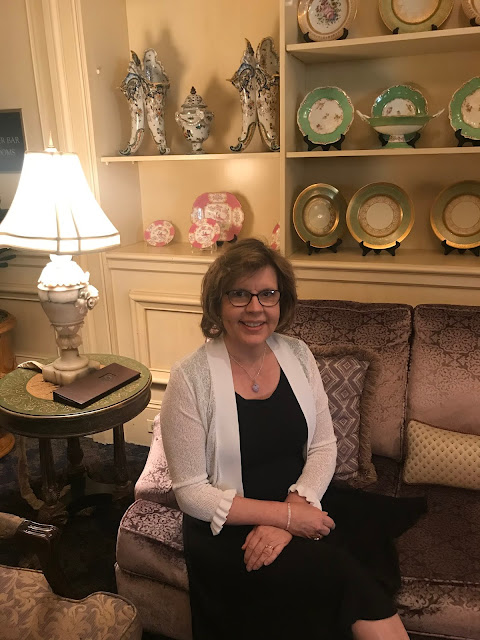 
There is so much to love about this edition, from its beautiful, textured cover displaying an inviting tea table topped with a crystal and silver three-tiered stand (and a tiny Highclere Castle photo insert at the top) to the twenty-seven locations to take tea throughout England, Ireland and Scotland described inside. With our "family connections" we couldn't be more excited to be part of this amazing British-tea-themed magazine!


The article that we wrote for TeaTime Magazine, "A Visit to the Real Downton Abbey", is updated with information on the upcoming film as well as news on Lady Carnarvon's newest book.

And, you'll also find us on page eight, as one of three contributing writers to this issue. There's a wonderful photo of Rachel (daughter and Marketing and Ops Manager of BTS) and me, in period attire, sipping tea. This was taken by Karri B. of Karri Brantley Photography (cousin and professional photographer).


When Lorna Reeves, editor of TeaTime Magazine asked me for a professional photo to use in British Tea, I immediately went to my file of photographs taken by Karri for BTS. After a quick consult with Karri, she found what we believed to fit the bill most perfectly. The photo was taken at one of our Downton-Abbey-inspired afternoon teas at Meadow Brook Hall. You'll see her credit on the bottom of the photo.


The request from Lorna reminded me of how important it is to have high quality photos for your business -  or special event - at the ready. It's an investment that continues to provide returns, whether it be projecting that professional image or keeping special memories as beautiful as the day they occurred. We've used Karri Brantley photography for our business, but  we've also recommended her to friends and family who used Karri's amazing services for head shots and special events (including one of my besties recent wedding!)


I've been pouring through the pages of British Tea as eagerly and leisurely as I've been pouring myself accompanying cups of tea. I'm inspired to create new afternoon tea recipes as much as I am to visit (or revisit!) some of the amazing historical and whimsical places to have tea across the pond (and when the emphasis is on "whimsey", check out the "Afternoon Tea on the Move" article).

We love British Tea and are thrilled our family-ties are connected! Order on-line or find it at Barnes and Noble bookstore through June!