Last weekend, my daughter, Rachel, and I had a most agreeable time at the Sixth Annual Jane Austen Festival in Louisville, Kentucky. This marked our fourth visit to historic Locust Grove where the Jane Austen Society of North America (JASNA), Greater Louisville, hosts the festival under the care and direction of its Regional Coordinator, Bonnie Wise.


Each year attendance grows and the town of Meryton expands to include more stores and merchandise, much to our delight. Period dress is the norm, although, not required. Many guests were spurred on this year by the festival's goal of breaking a Guinness Book World Record for the number of people dressed in Regency attire. Although, according to the Courier-Journal.com, the festival came a bit shy of the record set in 2009 in Bath, England, this year's attendees' efforts were exceedingly impressive. So many full-length gowns and waistcoats dotted the country landscape, one could easily be convinced they were transported to early 19th-century England.

We took in pastimes and crafts of the day, with surprisingly entertaining games and finely skilled artists. Rachel favored a numbers game played with a cleverly-constructed wooden box. It required no batteries to charge and no frustrating level acquisitions of our on-line addiction of Candy Crush. (However, I dare say, I do believe Miss Austen would have forgiven our Words with Friends indulgence and not dismissed it so equally as the trifling condition it may be considered.).

We were entertained by shadow puppets, bare-knuckle boxing, lace-making and a lesson on how the Navy men navigated the seas before GPS technology. We admired the latest red-carpet Regency styles which would have begged any E! correspondent to inquire, "Who are you wearing?". Betsy Bashore may be the impressive answer.

Traveling mostly by foot, we admired a lovely sedan chair that made its way through the grounds and provided a reprieve for weary walkers. (I do wish I could engage such transport when nearing the Cincinnati border, traveling south from Michigan.  It would relieve my poor nerves as we approach the bottle-neck traffic that always greets us on the bridge to Kentucky.)

In need of more shopping, we headed to the Visitors' Center to the vendors inside where a new one caught our fancy - Pure Hokum. This retailer offers a wide selection of fine, hand painted gifts including brilliant white china with Austen quotes. Rachel purchased a cup with the famous Darcy quote: "Surely you must know it was all for you". That charm can melt marshmallows before we even heat the hot chocolate.

Of course, as tea enthusiasts, like Jane herself, we never miss the afternoon tea. It's always a treat, but with the addition of Bingley's Teas, it was even more delightful. (For more about Bingley's Teas and their new Prince Regent Collection, see The Detroit Tea Examiner's article:  "Prince Regent Collection from Bingley's Teas"). The menu included tea sandwiches, scones and a selection of scrumptious desserts. Rachel chose the decadent chocolate bread pudding and I selected the lemon cake, the latter of which brought to mind our favorite Austen prince charming, Mr. Darcy. It was a fair balance of tasty tart and sour with hearty richness, ending on a sheer delight of sweetness with an irresistible luscious topping. (Oh, my, I appeal to anyone within striking distance for a fan. I do believe the temperature of the room has elevated greatly.)

Speaking of the master of Pemberley, the great highlight this year, as always for us,  was the "Dressing of Mr. Darcy", expertly executed by Brian Cushing. With a most appealing countenance and a fine figure, Mr. Darcy shed articles of his attire while describing their importance and history. Starting with his hat, then a nod to his hair, he removed his jacket, cravat and suspenders, giving full warning that his pants, boots and all else would remain on his person. Despite any collective unspoken entreaties from the audience for more, we remained a respectful and admiring group. 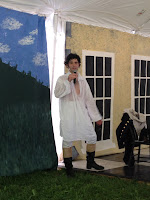 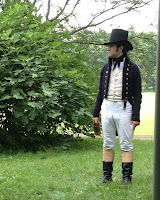 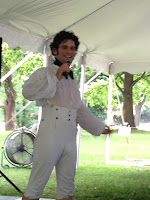 From the genteel male fashions, we journeyed across town to the gentlemen's civilized sport of dueling. We gathered in the Village Green to witness a battle between adversaries. I dare say, our own Mr. Darcy showed up as one of the combatants and, to our distress and horror, without a happy ending. An unexpected shot fired through air, and, alas, our handsome hero was left, face down on the grassy lawn. I shall hastily add, however, that as the victim's body was carried away, in front of astonished fans, we detected a charming, unsuppressed smile on the lips of Locust Grove's very own Mr. Darcy.

As we left the festival and all the endearments of the Regency period and Jane Austen, we once again relished our visit to the unplugged era of our favorite author. To a simpler, slower time where a turn about the room or picnic on the grounds could be enjoyed without a multitude of distractions. A heartfelt thank you to all who contributed to this wonderful affair:  surely you showed it was all done for us.

This week, Prince George Alexander Louis was born to the Duke and Duchess of Cambridge. Almost as English as the monarchy itself, tea is the perfect pairing for any royal event. Below are a couple of Barb's TEA Shop's recommendations for tea enthusiasts to honor the new prince.

To toast the new Prince George, The Royal Park Hotel is hosting a "Royalty Tea". With a regally-themed menu including Duchess of Cornwall Scones and a Kir Royal cocktail, the Rochester luxury hotel afternoon tea is fit for a queen. . .or king. Readers of The Detroit Tea Examiner can receive a 10% discount if they mention this article (through August 22), when making reservations:  Special savings on 'Royalty Tea' honoring new Prince George at Royal Park Hotel.

We visited the Royal Park Hotel last November and loved the ambiance, the food and the great service, including personal attention from Tea Hostess, Mary Kuhn. (for a full account, see our blog story, "Fit for a Queen or three: Afternoon tea at the Royal Park Hotel").

2.  A cup of Prince Regent Tea from Bingley's Teas

Keeping it all in the family, celebrate Kate and William's new son with tea created to honor a royal ancestor, the Prince Regent. Last weekend, we were in Louisville, Kentucky for the Sixth Annual Jane Austen Festival and met up with Julia Matson, owner of Bingley's Teas. Known for their tea blends inspired by characters in Austen novels, Bingley's Teas has created a new line of teas with a nod to the Prince Regent and popular teas of his time.


Packaged regally in a black,glossy tins sealed with gold wax, the Prince Regent line includes "Evenings in Ceylon" a rich black tea that has become a new staple in our humble household.

Be it a fancy afternoon tea with friends or just  a cup of regal tea at home, join the celebration from "across the pond" and give yourself the Royal treatment.
Posted by Barb's Tea Shop at 11:27 AM No comments:

It's always a cause for celebration when my Tea Time Magazine gets delivered, but the most recent July/August issue really inspired me over the holiday weekend. The cover title boasts "sensational blue and white issue" over a beautiful, glossy photograph of a teapot and teacup in the aforementioned color scheme. As I poured through all sixty-six pages of the magazine, filled with tablescapes ranging from an elegant birthday party with teacups lined in gold and accompanied by cobalt blue crystal,  to a casual porch tea using a more informal country cottage floral-patterned tea service, I couldn't agree more with its title caption - blue and white is sensational!

In her "Editor's Letter", Lorna Reeves shares that the combination of  blue and white brings her "cheer" which  is why most of her own china is comprised of those two colors. Further evidence of her affection for this color scheme is that she not only owns so much of it, but that she prominently displays the china throughout her home. That caused me to take another look at my own small collection of blue and white tea ware and, perhaps, bring it up more up front and center.

The timing was perfect, too. We just had our upstairs redone - all rooms painted and floors refinished, including my home office. My husband and I had packed up closets and bookcases filled with a multitude of treasures, clothes and books. Now it was time to re-sort and replace. That's when my July/August issue of Tea Time arrived - just in time for inspiration. And, on the Fourth of July extended weekend, after our big family gathering on Thursday, I had an extra few days to focus on the home.

I gathered up my small collection of blue and white china that had been  dispersed in several plastic storage bins. Putting the grouping all together in small, antique knick-knack shelf I relocated from the master bedroom to my office really put a nice welcoming touch to the room.


As with most of my teaware, each has a story and a connection to someone or someplace worth remembering. The blue willow tea set and tea cup were a few years' worth of Christmas gifts from my brother-in-law Bryan. He found those at Adagio Teas and they were always a treat to receive. Adagio still has the collection available (should anyone want to know!).

Like the range of china in Tea Time's tablescapes, my two other tea cups represent the endpoints of the spectrum from elegant to country casual.  The cottage-floral patterned cup was a present from my friend, Christine. We were shopping together one Saturday at Kristeas in Berkley and she bought a set of blue and white tea cups. At the cash register she surprised me by putting a cup and saucer in my bag. It's a great reminder of the fun afternoon we spent and it's one my favorite go-to cups for at-home teatime. (See the video in my last blog story, featuring Barb's TEA Shop with Mr. Tea.)


Checking the stamp on the bottom of the saucer, I found it's  from J & G Meakin, England. The pattern is Classic White Nordic, and according to Wikipedia, the company started in the mid-1800's producing affordable china for domestic and export sales. Production stopped in 2004.

The fancy cup is a recent acquisition - I purchased that at the Detroit Institute of Arts last December when my family and I went to see the Faberge Exhibit. The DIA sold many Russian-related items in their gift shop for the occasion and this tea cup was part of that offering. I don't know much about it other than where I bought it and some heavy red script on the bottom that I can't make out, next to "made in Russia".

I love the knew look in my office. I have the shelf next to a comfy  chair so guests can be welcomed by the blue and white china display. I hope it brings my visitors as much cheer as it brings to me (with much credit to my kindred spirits at Tea Time).