In June of this year, I posted a blog about one of the Mother's Day gifts I received from my son, Matt - a gift certificate to an exciting, relatively new-on-the-scene restaurant, Torino, in downtown Ferndale (see Mother's Day features favorite teas: Will Father's Day bring T's and Carrots). In that article, I noted the delicious five-course dinner my husband and I had, along with an additional beverage pairing the restaurant offers as an option. The food and drink pairings were amazing and the meal included what my husband referred to as the "best damn carrot" he ever ate.  We are such fans, we brought our most discerning foodie friends back this month for another sampling and it was a collective "thumb's up" all around.

I'm happy to report, and not at all surprised, that we are not alone in our devotion to this gourmet treasure in Oakland County. The Detroit Free Press' Restaurant Crictic, Sylvia Rector, wrote about her recent dining experience in Thursday's edition of the newspaper:

We still get the paper delivered, so when we saw that Torino was featured with a full two-page spread, we were thrilled. But, when you view the on-line article, you get treated to even more pictures, including a group shot of some of the crew at the restaurant, including one of Matt's friends (he has a few that work there, all reflect the entire staff's enthusiasm for their product while providing first-class service).

Torino ambitiously changes their menu weekly, so you will always be greeted with something new. They offer both three-course and five-course menus with optional drink pairings - both alcohol and non-alcohol selections - for an additional price. They also have a good selection of loose teas, which I'll write about in an upcoming blog!

We plan to be back very shortly. Our foodie group wants to make this a regular event on our calendar. It really is more than just going out for a bite to eat. When you dine at Torino's you are not only getting great food, but entertainment as well as you learn about the different foods, taste the unique blends and textures and view the artistic presentations of every single course. Some courses may be  served on glossy, asymmetrical china plates, others on striped-wood planks and  every one as delightful to look at as it is delicious to eat. Consider the price of a meal, movie and educational seminar, and you'll know it's a great value.

We heard that Torino was sold out for seatings this weekend, after the article hit the stands. Home of the "best damn carrot" and so much more - we're looking forward to our next visit and maybe we'll see you there, if we can all get in!

Meeting the Royal Chef in northern Michigan: Darren McGrady shares how the Queen takes her tea (and more!)

I was one degree of separation from the permanent residents of Buckingham Palace when I met the Royal Chef in person at "The Taste of Traverse City" last Saturday. Darren McGrady was chef to both Queen Elizabeth and Princess Diana before moving to the US sixteen years ago and has many great stories to share after serving the Royal Family for several years.

Author of the book, "Eating Royally", McGrady graciously agreed to a phone interview with me over a week ago to talk about his upcoming visit to Michigan. We chatted for almost a half hour and, among other palace tales,  he shared what the Queen liked for afternoon tea and how she would select the menu based upon who would be visiting. She never missed tea time, whether she was entertaining 6,000 guests or just her grandsons. As McGrady says, "It's the most important meal of the day and so quintessentially British". He is a captivating speaker, so I knew we'd be in for a real treat when we finally got to meet him in person in Traverse City this past weekend.

(For more of that interview, see the entire article, "Royal Chef to be featured guest at 'Taste of Traverse City' event".)
We arrived at the "Taste of Traverse City" a little after one o' clock, just after the gates opened. We were part of the VIP group that allowed us our own open-air lounge furnished with leather sofas and the opportunity for a one-on-one meet and greet with the Royal Chef.

The Royal Chef conducted two cooking demonstrations and one informal talk where he shared memories of cooking for the Queen for eleven years and, from there, his move to Kensington Palace to work directly for Princess Di.

Not surprisingly, when speaking of the Royals, the topic of tea does come up frequently. McGrady noted how there are four meals every day:  breakfast, lunch, dinner (which is served at 8:15 pm) and, without exception, afternoon tea. As the Royal Chef explained, "even the staff stops for afternoon tea". So very civilized!

The Royal Family is of German descent and so they hold on to many of the Christmas-time traditions. They open all their presents on Christmas Eve. .  . after tea, of course.

Favorite foods of the Queen and company are wild game and chocolate. Interestingly enough, the Royal Chef had prepared a meal that combined both, serving a venison with a chocolate burgundy sauce and he reports it was a big success.

The differences in protocol between Buckingham Palace and Kensington Palace is probably best illustrated in how one orders ice cream. McGrady told of the series of events that would occur when Prince William requested a dish of the cold dessert at the Queen's main residence. Several calls would be made, not only to the kitchen, but to those in charge of  the silver and linens.  Several minutes would pass before a bowl of ice cream would arrive, on a serving tray, in a fancy bowl with a starched napkin.

When Prince William requested the same dessert at Kensington Palace, however, he would often come right into the kitchen to ask the Royal Chef. McGrady tells of how he would point to the freezer and say to the young prince, "help yourself". The now Duke of Cambridge would gleefully run to the fridge and unceremoniously treat himself to a few scoops of ice cream - sans silver and linens.

The Royal Chef included a few autobiographical notes, including the story behind his move to Texas. He was inspired by Princess Di who often told McGrady they needed to move to America. After the tragic car accident, he was invited by Prince Charles to remain in England. But, McGrady felt it was time to try something new and he received many invitations from the rich and famous in the US, with the best offer for him and his family coming from Texas, where he still resides today.

McGrady is a frequent guest of TV news and talk shows, a professional speaker, author and host to annual culinary excursions to England. Two items have just been added to this year's "wish list":  the book, "Eating Royally" and Culinary Excursion 2014.

One degree of separation in 2013, shooting for even less in 2014!  Until then, a hearty endorsement for Eating Royally and I shall start my royal-in-training protocol by having my moose tracks served on a silver tray, in a crystal bowl, with a freshly pressed napkin. 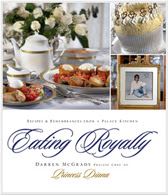