Nashville Part II: The Hermitage, Vanderbilt University and a little bit of Honky-Tonk-ing

While we loved our visit to the Grand Ole Opry and the Country Music Museum, there's also a lot of American history to soak in at Tennessee's capital city.

During our short stay in Nashville, we also toured The Hermitage, home to president Andrew Jackson. A strong-willed, self-made man, the 7th president of the US still remains a controversial figure in history. His home in Nashville, however, is beautiful as are the furnishings. There was an exquisite silver teapot on display  that Jackson bought for his wife, Rachel, during one of his trips to Philadelphia.


In the gift shop, (yes, there was one and yes, I had to go there), I purchased "The Hermitage" Earl Grey tea, from one of our favorite tea companies, Oliver Pluff (see our Key Lime and South Carolina tea blogs). Also picked up a china mug whose blue and white toile design is a replica of the wallpaper inside  the Jackson home.


Another "must see" Nashville destination on my list was Vanderbilt University. This school of higher learning was originally financed by Cornelius Vanderbilt. Also known as the "Commodore", he built a shipping and railroad empire that made him one of the richest men of 18th century America. That sizable fortune lead to some of the most extravagant spending and lavish lifestyles of the Gilded Age by the Commodore's grandchildren.


We've been to some of the homes of Cornelius Vanderbilt's decedents: Vanderbilt Mansion in Hyde Park, Biltmore in Asheville, and the Breakers and the Marble House, both of Newport. (Spoiler alert - in May, we'll be visiting another residence that was enhanced by the Vanderbilt money, Blenheim Palace in England. More of that to come!). 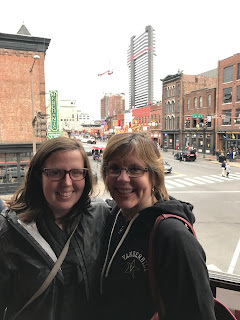 Of course, no trip to Nashville is worth its salt (on a Margarita at Jimmy Buffet's Margaritaville on Broadway) without a stop along the town's main drag, lined with bars and honky tonks, all filled with local color and amazing musicians. We hit three on Broadway, the city's main street, and listened to a variety of bands, from country to blues to rock and roll.

We spent our last evening at Puckett's, a restaurant that serves up fine Southern food and hospitality with live entertainment to boot. We indulged in fried chicken and cornbread while listening to a host of talented singer/songwriters. My husband was inspired!

Although this concludes Part II of our vacation in Nashville, we hope we'll be taking in Part III in the near future. We loved this city, full of history, music, good eats and good times and we hope to be back very soon!

This month we had a grand ole time in Nashville  -  home to not only country music's most famous venue, but to the 7th president of the United States as well as a university with connections to one of the most celebrated families of the Gilded Age.  With travel tea cup in hand, we visited all three places (and more!) on our long weekend in Tennessee's capital city.

Although I don't follow country music much, the Saturday night show we attended at the Grand Ole Opry was one of the best musical evenings I've ever experienced. The two-hour live stage show and simulcast radio program were filled with familiar classic tunes of Hank Williams and Patsy Klein along with cross-over hits from today's country music stars. Mixed with a lot of endearing, folksy humor and outstanding guitar and fiddle playing, there really was something for everyone.


The evening of country music legends continued with a back stage tour that's offered after the show. Here you get to view the dozen-plus waiting rooms customized for certain guests and an opportunity to stand on the stage, in front of the microphone, and look out to the rows upon rows of theater seats - intimidating even when empty. You can have your picture taken at this spot, and find a copy of it waiting by the gift shop for purchase if you choose. Of course, that was a foregone conclusion. I had the check ready before the tour concluded. 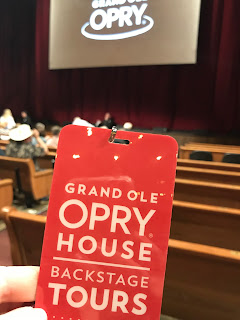 We came upon a cool family connection during the tour. In the mail room, where the current Opry stars have their own mailboxes, there's a wall lined with nameplates of all members, past and present. Here we found Billy Grammer's name, a cousin of my father-in-law's.  Billy was a frequent guest at the original Opry and Chris and I and our children had the pleasure of meeting him on a few occasions and hear him play guitar, witnessing his amazing talent first hand.

Our next day in Nashville, we learned more about this entertainment genre at the Country Music Hall of Fame. 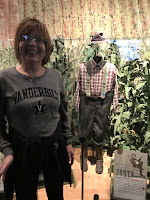 Highlights for us included spotting a few Grammer guitars, a Taylor Swift exhibit and, my favorite, the cornfield from the original set of Hee-Haw. With the latter, I felt right at home with Grandpa, Lulu and Junior Samples. 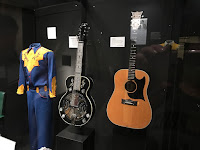 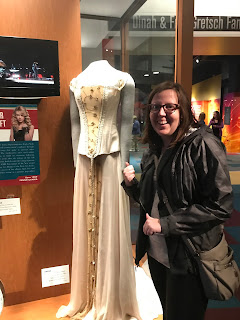 At the Museum's gift shop - yes, there is one and yes, I had to go there - I found a delightful tea cup as a keepsake of these country music memories and some fancy soaps inspired by famous songs. How can one resist, "Friends in Aloe Places" or "I Walk the Lime"? I coudn't! 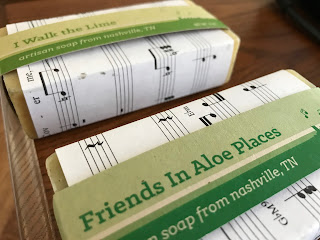 Last Tuesday, Lisa See was once again visiting Detroit to discuss one of her historical novels. Although we're a fan of all her works, her most recent, "The Tea Girl of Hummingbird Lane" struck a particular chord with Barb's Tea Service. As with many of her novels, See draws from her own personal ancestry and rigorous research, but her latest book also focuses on Chinese tea, in particular pu'er.  Immersing herself in the subject, she not only learned more about the Akha culture, (one of the ethnic minorities in China), but also about pu'er, the only tea that improves with age.  With her focus  on the latter , See became a self-proclaimed "tea snob" and, we here at BTS know, there's nothing wrong with that!

We first met Lisa See two year's ago when she came to the DIA as part of her book tour for "Shanghai Girls". As captivating a speaker as she is a writer, she talked about growing up as part of a large Chinese-American family (on her father's side) whose history intrigued her and influenced much of her writing.


As part of See's 2016 book tour, Detroit-area local libraries chose "Shanghai Girls" as their book of choice for that year's "Everyone's Reading" program. BTS was delighted to partner with two libraries, Birmingham's Baldwin Library and Canton Public Library, to present  a "Tea from China" talk along with a tea tasting of, you guessed it, teas from China.

Lisa See presented to a standing-room only crowd last Tuesday at the Troy Community Center, an event hosted by the Troy Public Library.  After the formal program, she graciously stayed after to answer many questions, one of which was, "what is your favorite tea?"  She paused for a moment, and then said while she was always a tea drinker (enjoying jasmine tea especially), after digging into the world of pu'er it has become her favorite. In fact, she admitted, she has become a "tea snob".  We already admired her for her fascinating writing - that she's an unapologetic tea enthusiast endears us to her even more. 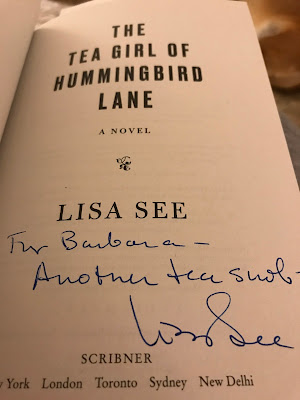 Watch for an upcoming "Tuesday Tea and Tomes" to feature "The Tea Girl of Hummingbird Lane".

The Royal Eagle: Russian afternoon tea in The D

A Russian-themed tea and an afternoon of serenity can be found just outside of Detroit and as the "Barbs-at-Tea" discovered, what a find it is!

In a quiet neighborhood in Harper Woods, The Royal Eagle delights visitors with a Russian afternoon tea, but that's not the only surprise that awaits guests. On a residential street, in city that borders Detroit and the Grosse Pointes, there's not only a restaurant, but a monastery, both housed in Eastern Orthodox-style buildings. Although, it looks as though this sanctuary has been there for centuries, it was formed only nineteen years ago in  1999.

Great tea friend, Barb Tabb, suggested we visit The Royal Eagle last month, since it is a destination  that has been on both of our tea-places-to-try lists for quite some time.

There's a feeling of tranquility as you enter the tea room and that's by design. Cell phones are not allowed (except for picture-taking) and a modest dress code is required.

But there's a regal-ness to the interior design as well. Chairs and drapes are a deep red hue, bordering tables, with crisp white tablecloths, where gold trimmed tea cups rest, awaiting guests.  Along with an impressive collection of antiques that are showcased around the tea room, including an amazing variety of samovars, there's a large picture of Tsar Nicholas II to remind visitors where The Royal Eagle derives its inspiration. The tea room was built to honor the memory of this last Tsar of Russia who was also a great patron of the Orthodox church.

The Russian afternoon tea is a seven course meal which starts with tasty borscht soup and ends with a special pastry of the day.


Tea sandwiches are served on a silver, three-tiered tray. Along with the traditional cucumber savories, there's also salmon salad and brie-cranberry-chutney canapes, the latter being one of my favorites.

The main course was paprika-infused chicken served with a fresh green salad tossed in a raspberry vinaigrette. The chicken was off-the-bone tender and packed with flavor and the tangy dressing on the baby greens provided just the right balance to the meal.

The grand finale - dessert - was an absolutely scrumptious lemon tart. It was a divine creation of  lemon curd in a flaky crust.


Of course all of this is accompanied by a fine selection of tea. I had the lavender earl grey, which I liked a lot, once I let it steep long enough (patience is a virtue - and what better place to practice but on the grounds of a monastery). Each guest is given their own pot of tea to enjoy with the meal.

The total cost of the entire Russian afternoon tea is $22.00 -  an incredible price for all the delicious food served up in such an attractive and unique environment.

Be sure to make reservations in advance, however, as tea is only served on Tuesdays and Thursdays.

Although we were there on typical Michigan spring day - rain, wind, snow, sun -  I plan to be back when the weather warms up. When the flurries subside,  guests can enjoy meals outside. There are  ponds and gazebos and a small winding path to walk the grounds.

If you're in the tri-county area and  want to experience a bit of Russian flavor and tea without updating your passport, you only need to embark on an expressway or two to reach The Royal Eagle.  It's a Russian tea room in the neighborhood and that just adds to its charm.