Dinner and a movie? How about lunch and shopping at The Show, Leon and Lulu's newest store and cafe

Leon and Lulu, the incredible retail store in downtown Clawson, is filled to its high ceilings with upscale home furnishings, fashionable women's clothing and unique and quirky gift items. In its former life, it was the Ambassador Roller Rink. Knowing that, it's not a stretch to imagine how the owners of Leon and Lulu turned the neighboring building, once the Clawson Theater, into a fun shop featuring Michigan-made items, specialty greeting cards and a delightful cafe. 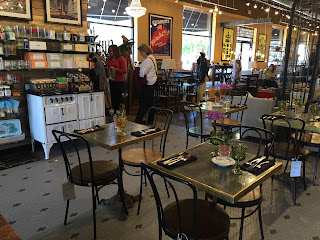 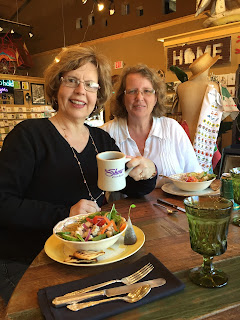 We visited Three Cats Cafe, the bistro within The Show last month and thoroughly enjoyed ourselves. Lunch is served daily from 11:00 to 3:00 and there's a long list of specialty drinks to accompany one of the cafe's soups, salads or sandwiches. There's also a nice variety of cookies and other sweets.

The tea is all from Tea Forte, the company that specializes in the pyramid-shaped tea bags. 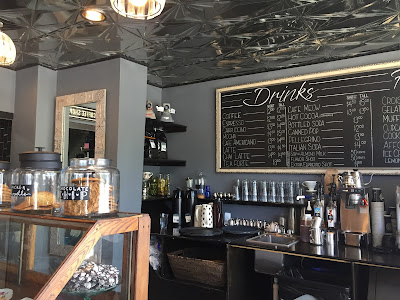 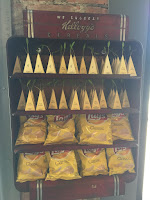 We ordered chicken salad and chowder (and tea) and everything was tasty and nicely presented. 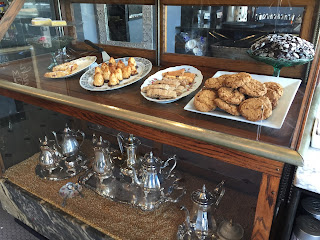 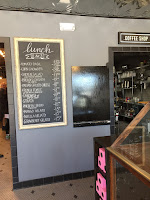 The cafe has bistro tables set at the front of The Show, so you can soak in all the fun merchandise, artistically displayed throughout, while you dine and drink.

We visited The Show while my sister-in-law, Cara,  was in town for my daughter, Rachel's, graduation from MSU (for her Masters in Market Research). We were treating ourselves to a girl's "no regrets" weekend.  This store is SO unique, they even sell a hilarious line of soaps with various goofy slogans, and I found one for my sister-in-law to take back home, "No Ragrets".

Once you've supped and shopped at The Show, it's just a short trip next door to continue the fun retail experience at Leon and Lulu's. We were especially fond of their teaspoon/teacup chandelier.

When you return to The Show, you will be greeted by a permanent ticket taker. Admission is free and you won't be disappointed in what's playing. It's all good, all the time.

Surely, "No Ragrets" to seeing this show! 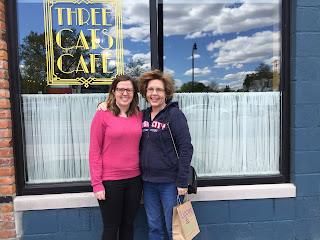 Leon and Lulu and The Show are opened seven days a week. For more information, visit their website:  http://www.leonandlulu.com/


One hundred things to do in the Upper Peninsula? Ya, you bet!

As a daughter of a Yooper, and one who made annual treks over the bridge for over 50 years, I can tell you "100" doesn't cover all the great adventures in the UP. That's why I think Kath Usitalo may already need a sequel to her recently published book, "100 Things to Do in the Upper Peninsula Before You Die".


We met author Kath Usitalo last weekend at Saturn Booksellers in Gaylord, Michigan. (This book store is a real gem - bright, cozy and filled to the brim with great reads.).

Kath Usitalo knows the northern Michigan territory well. Although she grew up in a suburb of Detroit, her parents were from the Keweena area in the UP where she visited frequently. Now, she lives in the Upper Peninsula year round where she writes her blog, GreatLakesGazette.com.

Many of the residents of the UP have family ties to the Nordic countries. Usitalo is Finnish and, similar in roots, my Dad's parents immigrated from a Swedish settlement in Finland back in the early 1900's. (We visited Helsinki and Vaasa in 2001 and, aside from the pleasure of meeting many other "Engmans", we could not get over how much the terrain, with it's plentiful pines and pristine natural lakes, resembled northern Michigan).

Of the one hundred things to do in Kath's book, I've personally done 34. My Dad being from Baraga, it's no surprise that I've been to the Shrine of the Snowshoe Priest - aka Bishop Baraga -  (#52), a number of times. It's the towering bronze statue that overlooks the bay between L'Anse and Baraga.

However, we didn't limit ourselves to just my Dad's hometown to experience other "things" to do in the UP.  We've watched freighters carried through the Soo Locks (#72) via the marvels of modern engineering, toured the spectacular Pictured Rocks by boat (#45) and, as recently as last fall, experienced for the first time the amazing beauty of the Upper Peninsula's waterfalls (#23). On the way home from that last trip, we also stopped at Java Joe's (#2) in St. Ignace.

Speaking of tea, one more thing to do in the Upper Peninsula that's not in the book is afternoon tea at Four Seasons in Houghton - perhaps for the sequel?  (It is, however, in my book, Michigan Tea Rooms).


One UP thing we've tried since last weekend, courtesy of Kath and her book, is Trenary Toast (#5). Kath had samples of this Upper Peninsula taste treat for those in attendance of the book signing event. This toast is twice baked and coated with sugar and cinnamon. It is dunked in coffee or milk and, once softened, adds a sweet and satisfying taste to the liquid it's immersed in. We tried it in coffee and loved it.  Next, you just know we'll experiment with tea!


"100 Things to Do in the Upper Peninsula Before You Die" is now available at Saturn Booksellers and other retail outlets. For more information, visit GreatLakesGazette.com.

The British Accents Tea Room in Sarasota: A taste of England in The Sunshine State


In an unassuming strip mall in southern Sarasota, there's an aptly named tea room and retail store:   The British Corner Shop and The British Accents Tea Room. In this little corner of the gulf side of Florida, you walk through the storefront doors of an All-American shopping center into a most delightful slice of England, complete with tea time and merchandise from "across the pond".

Last week, my mother-in-law, Barb Gulley, and I (the other, "Barb Gulley"), visited The British Accents Tea Room, having made reservations the day before for their Traditional Afternoon Tea.   We enjoyed every minute of our stay, from the retail shop's shelves filled to the brim with fanciful English merchandise to the cozy tea room in back, with tables covered in crisp, burgundy-hued linens donned with three tier trays and teapots festooned in hand-knit coverings. A glowing "fire" in the fireplace along the back wall added to the ambiance, feeling much more British Isles than tropical U.S.

But, perhaps most importantly, the food and service are excellent. We were cheerfully greeted by chef and server, Moira Nichols and Arlene Sullivan respectively, and they bring home the British connection. Moira is from England, having moved here over twenty years ago and Arlene did a study abroad in Britain.  Both shared interesting stories of their native/adoptive home.

The Traditional Afternoon Tea is absolutely delicious, consisting of scones, sweets and savories all served up with a smile and an expertly brewed pot of Earl Grey (our choice, there is a wide selection of teas to choose from).

Our scones, accompanied by strawberry preserves and Devon cream, were freshly baked and scrumptious -  and just the right consistency, too.

We were given the choice of two sandwiches each and you can easily share their generous portions. We asked for the smoked salmon and cream cheese, the egg and cress and cucumber. All were amazing, but I especially loved the smoked salmon!


All of this was topped, quite literally, by an assortment of small pastries for dessert. Chocolate-topped tiny tortes and lemon cake were our favorites.


And, after dessert, there's shopping to be had. The British Corner Shop carries a wide variety of products from England including tea, tea sets, purses and teddy bears.

The British Corner Shop and British Accents Tea Room is a lovely trip to England without ever needing to cross the ocean.  A wonderful place to enjoy a spot of tea in Sarasota, Florida.