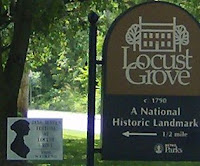 It was a fortnight ago that BTS, including Mrs. and Miss Gulley, attended the Jane Austen festival at the historic Locust Grove, in Louisville, Kentucky. We experienced such felicity, it is our hope that our account of the event will meet with our Dear Readers approbation.

On the weekend of July 18 - 19th of this year, Locust Grove held its second annual JA festival, full of all things Jane and Regency

period. Bonnie Wise, president of the Louisville chapter of the Jane Austen Society, is the coordinator of the festival and the perfect hostess in manner and dress. Attired with the requisite bonnet and empire-waist gown, she greeted guests with alacrity and charm.

The site of the festivities, was once the home of William and Lucy Clark Croghan and, later to George Clark, Revolutionary war hero, brother-in-law to William Croghan and older brother of William Clark, of the famous "Lewis and Clark". Built in 1790, it approximates the time when our favorite author was spending her days in England (more than likely never conceiving she'd have a fan club more than 200 years later - and across the pond, at that) . Locust Grove's handsome buildings dot the rolling grounds of eastern Louisville and if you check your ipod and your cell phone at the door, you will swear you are back at Netherfield, seeing Mr. Darcy approaching from the manicured path. Do not think we are aggrandizing - it is the truth! 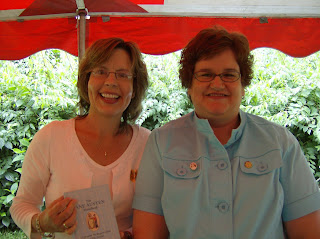 Our first event of the day was a book talk, by another of our favorite authors, Margaret Sullivan, editrix of Austenblog.com and writer of "The Jane Austen Handbook". Loaded with multifarious facts about Jane and the Regency period, enhanced by teasing tidbits ("a lady" did not wear * ahem* panties) and delivered with sassy wit, Ms. Sullivan delighted her audience and gave us much to ruminate upon. Thanks to her "Five Things a Janeite Heroine (or Hero) Needs to Know", under the topic of servants, I now know why it was quite acceptable for Elizabeth Bennett and her aunt and uncle to tour Pemberley without Mr. Darcy being present. It also explains why Mrs. Rushworth, after some study, was almost as knowledgeable as the housekeeper "to shew the house" to her guests. The Handbook is a must have for all JA devotees as well as those curious as to Regency customs. It's a reference guide that is as interesting as it is entertaining.

After the talk, we strolled the grounds before our afternoon tea time. We toured the Croghan home, climbing the narrow stairs to the second floor, to see period fashions displayed throughout. After a turn about the room, we noted a lovely table set for tea in one of the period bedrooms. How civil!

From there, we hit "Meryton" and shopped for bonnets, feather adornments for one's evening attire and the latest in shoe and boot wear. We talked personally with the Shoe Maker, who showed us how some shoes were constructed so they could fit either foot - thus making it possible to have to replace only one, should the other be lost or ruined. Dear Readers, I dare say, you won't find any Jimmy Choo, but, thankfully, you won't see any crocks, either.

Then, back to the "Regency Emporium", the main market place where we bought some Pemberley soap and browsed through dress patterns and specialty books. This was also home to the "main dining room" where we were shown our table for afternoon tea time. We sampled various Harney teas and were treated to a three-tier tray filled with scrumptious sweet and savory favorites. The meal's finale was quite literally the icing on the cake and we had our choice of several to pick from - I had the carrot cake with its creamy white frosting and Miss Gulley the spice, with its golden, caramel topping.

, those were not the only riches being served. We saved room for the fashion show, which was was a living display of Regency attire for men and women, hosted and created by Betsy Bashore. It was an early 19th Century Project Runway, with the latest styles that would make Heidi Klum and Tim Gunn demand an encore. Squires and Ladies and young misses walked the aisle way to an admiring crowd. (Perhaps, Mrs. Gulley will need to acquire a new gown and reticule for the next JA Festival!)

After a day in merry old Louisville, it was time to locate our Chevy four-wheeled phaeton in the parking lot and drive back home to 2009 on the interstate highway. We recharged our cell phones and Miss Gulley plugged in her ipod with not a single country dance on the shuffle. Bidding adieu to our Jane Austen world for the moment, we had much to cogitate on our way home for it is most certain that we will be back again.

Yours, Dear Readers, in TEA and Friendship,