First Lady Tea with some of my first ladies of tea

Last month, at the urging of my friend, Barb Tabb, I attended the First Lady Tea at the Governor Warner Mansion in Farmington. Barb went to the annual event last year and recommended I put this one on my calendar for 2018.


With a delicious afternoon tea catered and plated by Kelly's Cucina (we especially loved the curd and cream served up in wine glasses) and details overseen by Linda Pudlik, who started the teas at the Mansion, we knew we were in good hands

After the tea was served, Joan McGlincy, presented an interesting presentation on Flo Harding, wife of Warren G. Harding, a president plagued with scandal.

As a history and tea buff, this event hit a few buttons. My daughter, Rachel, and I (two Political Science undergrads) are on a quest to visit the homes/libraries of all the presidents and with Harding's home and museum a short journey to Ohio, this was the inspiration  for a future road trip in the near future.


Barb's two sister-in-laws joined us at our tea and it was a fun and educational afternoon. We'll be looking for next year's subject with great anticipation!

The Countdown begins!! One year from today, the Downton Abbey movie premieres!


As announced yesterday in several on-line media outlets, including Variety, not only has the production of the Downton Abbey movie already begun, but a premiere date has been set:  September 20, 2019!  We're bringing down our hemlines and dusting off our parasols in anticipation.

We can hardly wait!

Like so many, I'm a Downton Abbey fanatic. Starting back when the British Edwardian-era drama first  aired in the US in 2011, I jumped on the Downton Abbey bus and never got off.

Our great attachment to this Masterpiece serial took us on the road for DA-themed destinations, including a visit to Wilmington, Delaware, to take in one of the early traveling Downton Abbey exhibits. We also met Jessica Fellowes that same trip. That was our first one-degree-of-separation from the show's creator, Julian Fellowes (Jessica is Julian's niece). Jessica has written four Downton Abbey companion books (and, yes, we have them all!).


The ultimate DA trip was a visit to the "real" Downton Abbey, Highclere Castle. My daughter, Rachel and I walked the grounds and toured the estate in 2015. We also visited Bampton Village, where the Downton Abbey town scenes are filmed.

Our visit to Highclere, along with my interview of one of the residents, Lady Carnarvon, was featured in an issue of Tea Time Magazine. 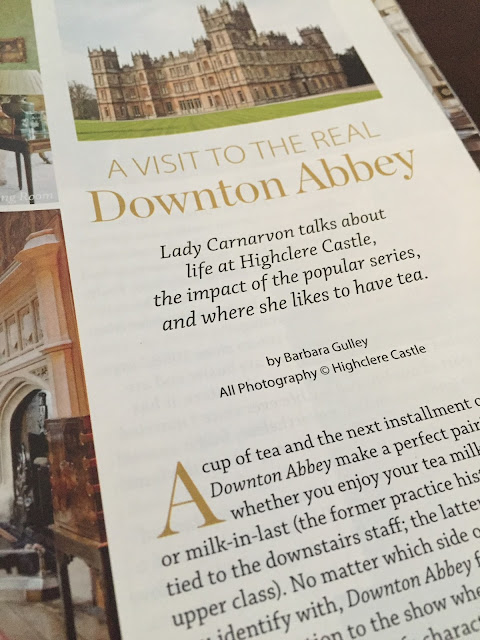 Barb's Tea Service has done a lot of Downton Abbey-inspired teas, from the Townsend Hotel in Birmingham and Meadow Brook Hall in Rochester, to libraries and museums throughout Michigan.

We've continued to carry on the DA teas (with another in just two weeks!), and we're gearing up for more in 2019.

Get your tiara ready and the popcorn stored up.

If the anticipation gets to be too much, have a cup of Republic of Tea's Mrs. Patmore's Pudding tea and snuggle up with one of the Crawley's - teddy bears, that is. 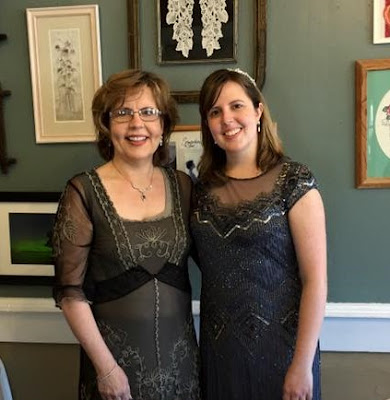 
Our Tuesday tome is "Three Sisters, Three Queens" by Philippa Gregory and we're pairing it with English Breakfast tea from Hampton Court Palace because it's strong and hearty like the women in this page-turning historical fiction. These Tudor sisters married kings, but all suffered the losses of husbands and children and were victims of poor alliances and isolation. In addition, they endured physical pain hard to fathom, exemplified by Margaret Tudor's weeks long journey from Scotland to England on horseback while eight months pregnant with a broken hip.

English Breakfast may not be strong enough!

The intertwining stories of the Tudor sisters - King Henry VIII's older sibling, Margaret, his younger sister, Mary, and his wife, Katherine of Aragon - are told from Margaret's perspective. She recounts standard sibling issues - love, jealousy, competition and empathy -  but in the very non-standard environment of life at Court.

I purchased this book while vacationing in England and Scotland in May, not knowing that most of the story took place in Scotland and, a great deal at Holyrood (and Edinburgh Castle) which we visited while in Edinburgh (see June blog story, Hurray for Holyrood for more on that palace).

Many of us were introduced to Philippa Gregory with her very popular book, "The Other Boleyn Girl", early in the new millennium. It was clear to her fan base (of which I am one!), Gregory writes about the Royals, but she is clearly the queen of historical fiction.  After The Other Boleyn Girl,  I read another  half dozen of Gregory's books in succession. After a few years' break, and while away from home, I found comfort in an old friend and I'm so glad I did.

Margaret Tudor was two years older than her brother Harry, the future King of England, but she left her home country  at the age of fourteen to marry James IV, the King of Scotland.  It was James IV who restored Holyrood in anticipation of his English Queen and they were married in the Holyrood Abbey, the frame of which still stands today.

Mary, the younger Tudor sister,  came up from behind and was wed off to the King of France. She was eighteen and he was the advanced age of fifty-two.

Katherine waited  her turn at a second chance to marry a future king, after her husband, Arthur, the Tudor's eldest, died within six months of their marriage.

Although the three sisters were rarely all in the same room at the same time, let alone the  palace, they exchanged letters to express their feelings and concerns. Margaret and Katherine poured their hearts out, describing fears of abandonment and infidelity, while, in shallow contrast, Mary described the latest in fashions in her childlike scrawl.

Three Sisters, Three Queens is a fascinating account of Royal life in sixteenth century Western Europe, and one that reinforces that life was not so easy, even if spent in castles and palaces. As we were leaving Edingburgh, with our GPS mounted on the dashboard of our rented car, no matter the challenge of driving on the wrong side of the car and on the wrong side of the road, and the heavily trafficked roundabouts we navigated on a bank holiday weekend, I was not eight month's pregnant with a broken hip riding on horseback.  It may be good to be Queen, but I'll settle for 21st century non-nobility. 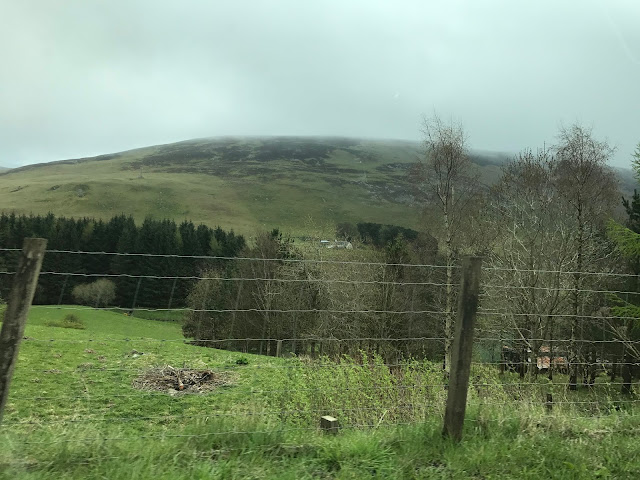 Going way back with Chatsworth: Afternoon tea and tour of the 'real' Pemberely No. 2


Chatsworth and I go way back and it was a thrill to finally meet this great estate in person.

Not only does Chatsworth have a fabulous alter ego as Pemberley, the impressive home of Mr. Darcy in the "Pride and Prejudice" movie featuring Keira Knightly and Matthew MacFadyen, but its real life history is equally amazing.  I've been a fan of both fictional and factual residents for years. When I visited Chatsworth in May of this year, I felt like I was reconnecting with an long time pen pal - so many stories shared over the years and, now, we got to meet face-to-face.

Chatsworth began with Bess of Hardwick in the mid-16th century. Bess, a native of Derbyshire, came from modest means, but through ambition and strategic unions (four marriages), she became the second richest woman in Elizabethan England.  She convinced her second husband, Sir William Cavendish, a man who amassed great wealth taking down monasteries as a commissioner under Henry VIII, to build Chatsworth in her home county. It was this union that started the Cavendish dynasty and today the estate is still owned by descendants of Bess and Sir William.

I knew of Bess and some of her famous family line, including Deborah Mitford, through a couple of page-turner biographies by Mary Lovell:  "Bess of Hardwick" and "The Mitford Sisters".(Coincidentally, I was introduced to each book through separate sources, my mother and my former boss - see blog from May, 2016, Mother's Day: One for the Books).


When I was writing for an on-line newspaper, I interviewed Mary in 2014  shortly after the death of Deborah Mitford, who had married the 11th Duke of Devonshire and heir to Chatsworth.  Mary had personally met Deborah and was given access to some of the family's archives. Deborah's son is the 12th Duke and currently resides in the family estate. It's still a private home, although open to the public for tours.

We, of course, toured the manse, but also, to immerse ourselves the Derbyshire experience, we stayed at Bubnell Cliff Farms, a working farm and bed and breakfast on the estate of Chatsworth. It's just a two mile drive (or 30 minute walk) to the great home and certainly gives you the feel for the English countryside way of life. Bubnell is cozy, peaceful and as laid back as the cows who stroll the grounds of the  B &B.

After a relaxing night at the inn and a delicious hearty breakfast, we took our short drive to Chatsworth where history and fantasy collide in over 30 rooms of art and antiques, in particular the Sculpture Gallery, created by the 6th Duke of Devonshire in the early 19th century.  It is here, that Kiera Knightly's Elizabeth Bennet takes a turn about the room and blushes at the sight of some of the unadorned statues in Mr. Darcy's home.


In fact, Matthew MacFadyen's Mr. Darcy's bust still remains at Chatsworth and is displayed in the gift shop. Visitors are warned, "please do not kiss".


Other highlights of the tour: the beautiful dining room, one of the first indoor showers set up in a guest room and the tulip vases.  We learned the latter were very  popular in 17th century when "tulip mania" swept Europe. The market plummeted as quickly as it rose, and thus is considered one of the first examples of an economic bubble.  (Think of it as today's Bitcoin).

The last, but certainly not least, of the highlights was afternoon tea on the grounds (was there any doubt?).  In the array of shops and eateries around the mansion, we stopped at the Flying Childers restaurant which offers a "Wedgwood Afternoon Tea". Scrumptious scones and savories, along with deliciously brewed tea, are served on exquisite Wedgwood china.  Channeling our inner duke and duchess was not difficult here. 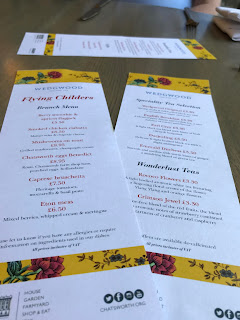 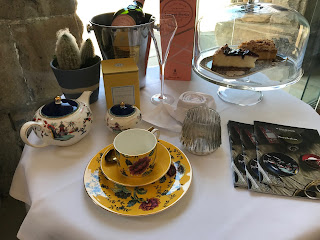 An amazing visit to another  place that brings together so many connections that I ardently admire and love.

Ah, yes, Chatsworth and I do go way back and I certainly hope we get to go back very soon!