Tea for Two's a Collection 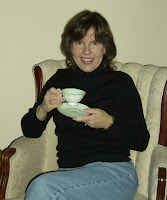 As a lifelong collector of many things, I subscribe to a few observations that have been attributed to this past time. The first is, if you have two of anything, you've got the start of a collection. The second is, that most collections start as a gift from someone. It probably wouldn't surprise you to learn that my most recent collection fits this description to, well, . . . to a tea!

After all these years as a tea enthusiast, I never really had a tea cup collection of high regard, although, I had amassed several tea cup display racks over the years in my aspiration to achieve such a goal. I will confess, I was distracted along the way with cherished teddies, Maude Humphrey figurines, limited edition Hallmark ornaments and, what I'll call "The Doll Years". But, I got closer on track with my assortment of Wedgwood jasperware and really zoned in when I targeted teapots. But the teacup collection, for whatever reasons, still eluded me.

That is until last year - and from such an unexpected source it emerged! For Mother's Day last year, my son, Rob, gave me my first vintage teacup. It was a wonderful gift - not only because of its delicate beauty and color, but the fact that he actually entered an antique store to purchase it. He was visiting a resort town on the west side of Michigan and noticed an antique storefront window display of teacups. He thought, "My Mom would love this store!" and figured it would be the perfect place to find a Mother's day treasure. (This is from a son who usually struggles with such holidays because they feel "forced".)

Naturally, this became one of my most prized possession (note, it is the solid green cup in the photos above, but inside there is a scene from the "famous Hamilton Rock Gardens".) I took my cherished cup and put it on display on a small tea table in our front room. There it resided, alone, for almost an entire year. Then came my birthday!

My sister-in-law, who lives in Denver, surprised me with another vintage tea cup for my 50th this year. She culled her own enviable tea cup collection for something she thought would best suit the occasion. And, she found such a treasure in a cup she had inherited from her grandmother, selected primarily because of its predominate color - gold! (to mark the half-century mark, of course).
When I opened the box from UPS that arrived in April, I was thrilled with the contents. I loved the "new" cup, but something more struck me immediately. This cup looked very familiar. In fact, upon further examination, it looked it could be a cousin to the one my son gave me.
So, I put them side-by-side and they were dead-ringers. Then, I looked at the stamps on the bottom of the cups. Identical markings! Both were stamped, "PARAGON" as well as "By appointment to HM the Queen". This was most incredible and sent me right to "google" to learn more.
I discovered that Paragon started out as "Star" China in 1899. It was founded by the Aynsley brothers in Longton, England. They produced quality china products including art deco patterns that competed with Shelly in the 1920's and 30's and a line of nursery-themed tea ware that is highly collectible today.
Star China later renamed itself "Paragon" to reflect the high quality of its product. Hugh Irving, a salesman at another china company, married a sister of the Aynsley brothers and became a partner. Later, the brothers retired and Irving and his sons took complete ownership. The Irving promotion skills grew the company and in 1933, Paragon was commissioned to make a tea service for the Duchess of York. That same decade, the company was granted two royal warrants (hence the notable stampings).
Paragon was bought out by Royal Albert in the 1960's, which in turn was bought out by Royal Dalton in the 1970's. The Paragon patterns were eventually incorporated in the designs of Royal Dalton and the Paragon name was discontinued. However, many of its pieces, especially the commemoratives, are still sought after.
So, that is the (somewhat) brief history of my new collection. But, as with any collection, the fun is not only in the receiving, but in the hunt as well. Last weekend, my husband and I made our annual trek to the Royal Oak Garage Sale . For those of you who may not be familiar, it's the city's big flea market in the month of July in one of its monster parking garages. What it lacks in ambiance, it makes up for in its variety of unique product offerings. I came loaded for Paragon and I was not disappointed.
Second level, third booth to the left, I found it. Among an assortment of pretty tea cups, it was right in the middle and most distinctly "Paragon" (now that I've become such an "expert" in only two short months). It had the same shape and design and green color of its siblings residing at my home and, after inspecting for the absence of chips and stains, I took out my wallet. I was ready to offer 20% lower than the ticketed price, when the booth owner said, "everything is 50% off." BONUS!! Not only did I get to add to my collection, but I got such a deal, too. Oh, what a happy afternoon that was.
So, next jaunt out, I will be looking for another Paragon tea cup to add to my significant collection. Final observation of this fun hobby - when you have three of anything, your collection becomes "significant'.
Yours in Friendship,

ps - to any Paragon Collectors (or any tea-related collectors, for that matter), an invite to share your information with BTS!

Tea Time Gets Warm and Cozy!

Barb's TEA Shop is excited to now offer one-of-a-kind tea cozies that will not only beautify your tea table, but keep your tea warm in the pot as well. These are handcrafted items made with amazing fabrics - some vintage! - and all offer special features you'll appreciate. Each cozy has a removable liner, which can be washed separately. In addition, each of these charming teapot warmers has a tab at the top for easy removal.

If you are looking for a unique gift of high quality for your favorite teaophile, that's both pretty as well as functional, you'll want to put these tea cozies on your list.

In the small size we also offer beautiful tea cozies made from vintage napkins (size 10 x 8). You'll love the charm of the delicate fabric and lace.

All of these tea cozies are available for $25.00 (plus shipping), but during the month of July, BTS offers a special introductory price of $23.99 (plus shipping).

Keep in mind, these are custom-made items, so no two are alike. With fabrics from funky to elegant, we have something for every tea lover's taste!