In the shadow of Edinburg Castle, just a scone's throw from the Royal Mile, sits The Elephant House, a gourmet coffee and tea room with a history as delicious as its menu. A bustling venue with rustic, contemporary décor punctuated with over 600 elephant pictures and collectibles, it was the inspiration of J.K. Rowling's Harry Potter books, much of them written in the back room where the old Scottish castle is in plain view. But, whether a budding author or weary tourist, there's something for everyone on the menu, with a great selection of coffee, tea, and adult beverages to accompany a variety of  pastries and main dishes. I ordered a pot of Earl Grey and a plate of scones while seated at a table, located mid-way between a very large portrait of an elephant and the scenic window views of Edinburgh Castle. Although during this visit, I didn't write much more than a check, I was inspired to pen more blogs! 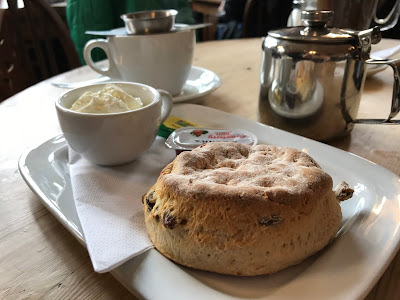 The scones were scrumptious as was the Earl Grey. The tea is loose and allowed to steep in silver pots, which can then be poured into cups topped with strainers (one of my favorite ways to have tea served up). 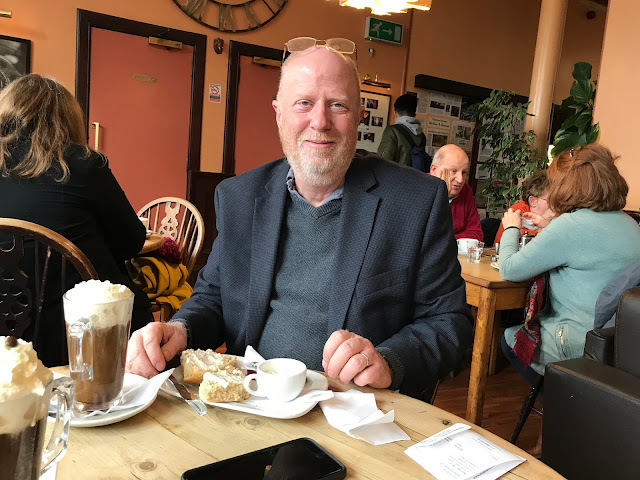 My husband, Chris, also had scones,  but selected a "Scottish coffee" for his accompaniment. It's a variation on an Irish coffee, swapping Irish whiskey for Scotch- a tasty twist on the classic apres dinner drink.


Unfortunately, time did not permit us to sample much on the menu, however, the views of the front counter displays filled with dazzling desserts, told us we must come back soon and partake of more.


(Although I came late to the Harry Potter fan club, my daughter, Rachel was an early adopter and read every book as soon as it came out. That prompted a visit to Harry Potter World in Orlando in 2013. )


Whether a Harry Potter enthusiast or not, The Elephant House in Edinburgh will enchant any visitor.  Amazing views of the city and castle, an appealing menu of food and drink along with hundreds of elephants, this coffee and tea house will cast a spell on you. No need to shy away from the elephant(s) in this tea room, you'll want to address them - and everything else here - head on. 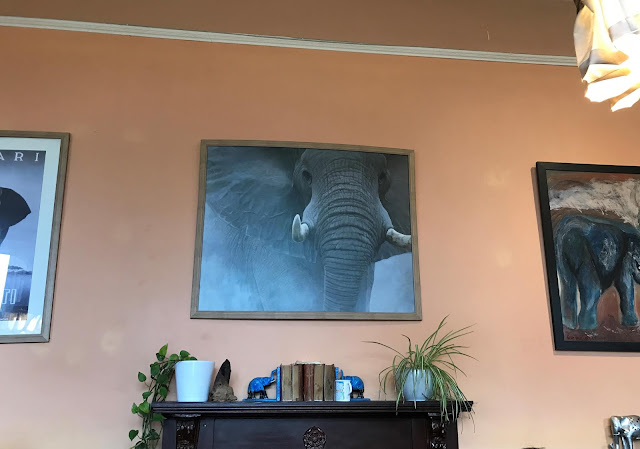 Holyrood Palace is a centuries old castle in Edinburgh that housed a Tudor wedding, witnessed a murder in the bedroom of Mary Queen of Scots, provided sanctuary for a future king of France, and after years of cyclical improvements and decline, was affectionately restored by Queen Victoria to much of its current state that visitors can see today. And, if that's not enough to entice one to tour, there's also a beautiful gift shop off the Queen's Gallery and a cafe for afternoon tea.  Hooray for Holyrood!

During our visit to Scotland last month, we visited Holyrood Palace, which, along with Edinburgh Castle, anchors The Royal Mile, the main thoroughfare of Edinburgh. While the castle at one end also has royal ties, Scottish monarchs began to prefer Holyrood for its lush, accessible grounds and grand style. King James IV of Scotland sealed the deal of making Holyrood an official royal residence when he improved the palace for his English bride, Margaret Tudor, sister of King Henry VIII.

That wedding, which was supposed to lock Scotland and England in perpetual peace, took place in Holyrood Abbey.  Over the years, both the abbey and the peace treaty suffered and, although today, both nations are united, much of the church is left in ruins.

Some of the history of  Holyrood and the Royal Wedding of 1503 is included in "Three Sisters, Three Queens" by Philippa Gregory (one of the books I enjoyed on this vacation and to be featured in an upcoming "Tuesday Tea and Tomes"). It tells the intertwining stories of Margaret and Mary Tudor and their sister-in-law, Katherine of Aragon.

Having immersed ourselves into the Royals and their history, we were ready for a bit of the regal treatment for ourselves with afternoon tea at the Cafe at the Palace.


To the side of the Holyrood Palace courtyard, the charming cafe is open to visitors for a variety of repasts. It's modern and unassuming in its decor - perfect for travelers who may have left their pumps and pearls at the hotel - but the service and tea treats are exquisite!


The afternoon tea fare includes scones, savories and pastries served up with a Scottish twist on the traditional three-tiered stand. Tea sandwiches included Aberdeen Angus roast beef with horseradish and Scottish smoked salmon roulade on oatcakes. We sampled a whisky soaked raisin and cherry scone accompanied by Scottish berry preserves and cream. And to top it all off, a variety of sweets, including a slice of Victoria sponge cake. This all paired delightfully with their fine selection of tea palace loose tea. Our favorite was the Palace Earl Grey.

Our final stop was at the Queen's Gallery, a modern events facility restored in 2002 to celebrate Queen Elizabeth's Golden Jubilee. It also houses a gift store where we bought commemorative souvenirs of the Royal Wedding of 2018.

The Queen still visits Holyrood every July, as it is the royal residence of Edinburgh. An enchanting and captivating castle, filled with history and royal tales, not to mention the gift shop and afternoon tea, we found this to be an amazing site to visit. Most certainly, hooray for Holyrood!

Vacationing across the pond to celebrate a milestone: We're cruising right along!

This Spring, in a joint celebration of our mutual birthday of April 11, my friend, Pam and I, along with our respective spouses, Quint and Chris, embarked on a trip of a lifetime: a transatlantic cruise on the Queen Mary. We met up in London mid-May to board the luxury ship in Southampton, which took us across an ocean to dock in New York.

Prior to meeting up in London, Chris, and I spent a week in the United Kingdom, flying into Edinburgh and journeying through the Lake and Peak district of England in a rented car. We really piled it on as part of my "milestone" birthday celebration, staying at several charming B & B's and visiting several great estates.

In the land where one drives on the "wrong" side of the road and bargains can be found at the local "pound store", there's so much beautiful countryside and quaint places to experience that keeping up with the local customs is just part of the charm.

Speaking of pounds, even the currency is enchanting. What felicity to see my favorite author on the ten pound note. Not surprisingly, the money wasn't our only English encounter with Jane Austen. We visited not one, but two, Pemberley estates - Lyme Park and Chattsworth - and had afternoon tea at both Austen mansions.

Starting our sojourn in Scotland, we felt like nobility. Our hotel was a stone's throw from the Royal Mile, the main street of Edinburgh, anchored by two castles: Edinburgh Castle and Holyrood Palace. We had afternoon tea on the grounds of the latter. Walking down this regal thoroughfare, we shopped for Royal Wedding souvenirs and kilts for our kids. We toured the Royal Yacht and, yes, had afternoon tea on board.


We also stopped at the famed Elephant House tea room where J.K. Rowling wrote her Harry Potter stories. We had tea and scones and I was inspired to write many blog stories!


We left Scotland in a rental car and headed south to the Lake and Peak district. My husband had wanted to come back to this part of the world for many years. Back when he was a young lad of 19, he and his good buddy set off on their own "Tour de England", cycling across Britain for six weeks. This particular area of the UK was his favorite and he was excited to return. Although he left the biking to the 1970's, he did accept the challenge of driving on the other side of the road and navigated the  narrow country roads and too many roundabouts like a pro.


We stayed at the amazing Miller Howe B & B in the Lake District, one of the loveliest places we have ever rested our heads. A room with a  spectacular view and amazing dining,  it's not surprising, Queen Elizabeth lunched here in 2013.

Our next stop  was Bubnell Farm, a B & B on a real working farm and once part of the grand Chattsworth estate. At night, we could see the twinkling lights of the village in the distance and hear the soothing moo's of the resident cows as they headed home.


No trip to Chattsworth is complete without a trip to the gift shop to see the bust of Mr. Darcy (Matthew Macfadyen, from the 2005 Pride and Prejudice, starring Keira Knightly). There's actually a a sign posted below that warns "please do not kiss".  Although I love all the Mr. Darcy's, if it had been Colin Firth, I could not be accountable for my actions.

Our final B & B was in Woodstock, and by that time, we were truly half a million roundabouts strong. The inn was Bleinheim Buttery, a charming  17th century building right in town and just steps from Bleheim Palace, home to Conseulo Vanderbilt (my Gilded Age Pleasure) and birthplace of Winston Churchill.


At last, we turned in our rental car in Oxford and took the train to London. We met up with our friends at The Bailey's Hotel in Mayfair. Although we only had a day left before the cruise, we squeezed in a trip the British Museum, hat shopping and the traditional stop at Harrods' Oyster Bar.

Finally, the day had arrived to board the Queen Mary and be indulged for seven days. With limited internet connections and no port of calls, one is highjacked to relax. We sat by the pool, read books, walked the decks, saw shows and dined superbly three times a day (at a minimum) and, of course, had afternoon tea.


At the end of our cruise, as we neared the Brooklyn Port - rising at 5:15 AM to catch the first sight of Ellis Island - I got misty eyed with an unexpected flood of emotions. Not only was it spectacular to see the Statue of Liberty stand tall despite the early morning fog, but reality set in that this vacay was at it's end.


I checked off so many boxes on this trip that I'm sure I'm covered for quite awhile.  I feel so fortunate to have  taken  this journey with my husband along with good friends. Turning the "new forty" was exceptional!

Please stay tuned for future bite-sized blogs on our trip across the pond and back - afternoon teas, Gilded Age, Jane Austen and more afternoon teas!