Tea Time Magazine's French-themed issue: A celebration of all things past (and repast)

French tea rooms, French tea and French china - the March/April issue of Tea Time Magazine is devoted to thé a la francais and nous l'aimons beaucoup! While learning about tea places in Nantes, it also brought back many wonderful memories of our visit to several favorite Paris salons du thés in the fall of 2008.

Bruce Richardson's article in this issue of Tea Time, "An Introduction to French Tea", highlights some of the top tea rooms in Paris including Angelina's and Mariage Frères, two of my all-time favorite tea venues. The former is across the street from the Louvre and the century-old tea room creates its own delicious works of art in the form of French pastries which go so well with Angelina's Earl Grey. Bruce Richardson also notes Angelina's hosted many of the rich and famous, including Marcel Proust. So appropriate, while we're remembering all things past!


And, while we couldn't bring back the scrumptious desserts, we did stock up on Angelina's tea and lined our travel bags with a number of the signature tea tins.


And to this day, I still say Mariage Frères is where I had the best cup of tea ever. There are so many varieties to choose from, but it's not just the selection that makes this tea room so remarkable. The servers are schooled in expert brewing and each cup is a delight to sip.


Bruce R. also talks about great day-trips from Paris, such as Giverny and Versaille. We were fortunate to experience both and take in some tea at each city, bien sur!


Giverny is the home of Monet, where he painted all those beautiful lilies in ponds. We learned the artist enjoyed not only painting his his cultivated gardens, but having a cup of tea there as well.

In contrast to Giverny's natural beauty, Versailles, the great French palace, and once home to Marie Antoinette, is over-the-top excess, but impressive down to every gold and crystal detail   We saw where Marie Antoinette slept and dined and the table where her custom-designed china resided. 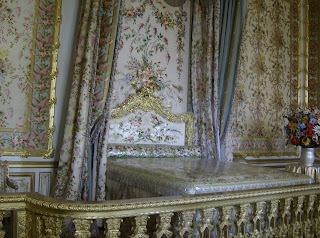 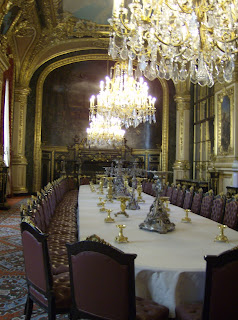 Tea Time Magazine's French-themed issue also spotlights the country's exquisite china manufacturers, including Limoges and Bernardaud's. And, oui, I do have a tea cup from the Bernardaud's Marie Antoinette tea service collection (shown on page 53 of Tea Time's latest issue). It is a replica of the china used by the ill-fated Queen. It incorporated a few of her favorite things: pearls and cornflowers. (I purchased my tea cup back in 2007 at Bernardaud's on Park Avenue while on a New York tea tour with Elizabeth Knight.)


The March/April issue of Tea Time Magazine, c'est merveilleux! It is full of fascinating details of the French way of tea and also a lot of great French-themed tea party recipes. A great read of new experiences, and, for some of us, of times past as well.

For the full, Proust-length blog of our trip to Paris, see Tea Tour in Paris, September, 2008

This past weekend, we headed over the Mighty Mac to Marquette to see the dog sled races, better known as the UP 200. With our extended family, aka the LP 9, we joined the crowds on Washington Street to witness the mushers and their eager pups start the upper peninsula's version of the Iditarod.

But, that was not the only exciting thing we experienced on Marquette's main street. A cup of hot tea and fresh baked scones were waiting for us at Babycakes Muffin Company.

Babycakes serves up coffee and tea with a variety of muffins, scones and light lunch fare. Friday night the venue extended their hours and offered guests a place to warm up and refresh while remaining in the center of the action.


We sampled a few teas (Earl Grey and an herbal mango) and both were tasty. They offer sweet and savory scones and we chose the former, a delicious raspberry treat served up in a generous portion.


The atmosphere is casual and friendly and a great place to hang with friends, study, or watch a team of eager dogs pull their musher on a sled.

Although the UP 200 comes only once a year, Babycakes is open all four seasons. When in the Marquette area, a stop at Babycakes will refresh any time of year.


The Gilded Age is coming tonight on PBS and we've got unfinished business.

Tonight, on PBS (Channel 56 for Detroit viewers), The Gilded Age is airing at 9:00 PM as part of The American Experience series.

Of course, we're counting down the minutes. But, we're also inspired to go back to some of our Gilded Age journeys.

A year ago last October, we traveled to Newport, Rhode Island to visit the grand mansions ("cottages") that belonged to the benefactors of the Gilded Age.  We wrote our first installment, "My Gilded Pleasure: Newport Mansions and Vanderbilding" back in November, 2016. Today, we pick up where we left off with "Newport Mansions: Part II".

The Elms, although not directly on the ocean, is located on the prestigious Bellevue Avenue, which was almost as important as being on the water. Built in 1901 by Edward Berwind, who made his money from the coal industry, The Elms was designed by Horace Trumbauer to resemble yet another Paris chateau.

However, the key to the design, was to make it look as though it ran by magic. Servants quarters were hidden behind a brick wall on the third floor (the facade gives the illusion of two stories, but there are actually three) and all staff entries and delivery stops were cleverly shielded by gates, trees and other decorative ornamentation. 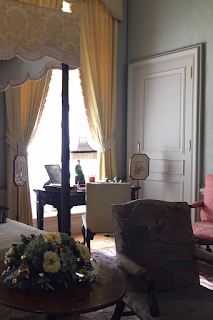 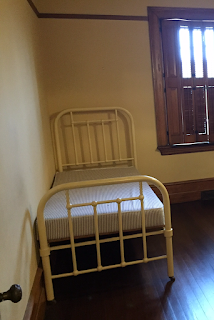 Another Bellevue Mansion, Rosecliff, is equal to its neighbors in luxury and style. Originally built in 1902 by American heiress Tessie Fair Oelrich, whose father amassed great wealth in silver mining. When Tessie married Herman Oelrich, they purchased the property from historian and diplomat George Bancroft. Bancroft was also a horticulturist and developed the American Beauty Rose. 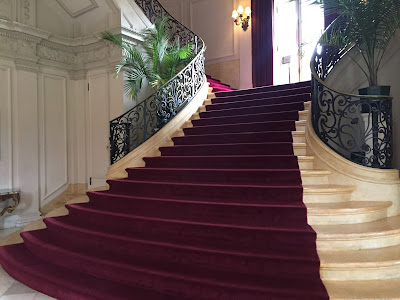 Rosecliff is known for its heart-shaped staircase, grand ballroom and spectacular views of the ocean. It is also the location of many movies, including the Great Gatsby starring Robert Redford. 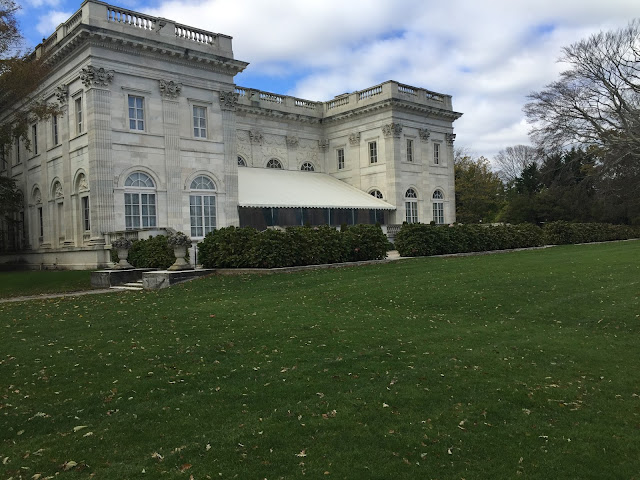 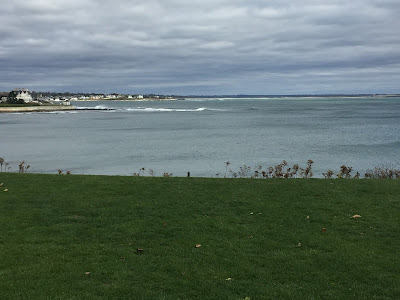 Our last tour was of Chateau- sur -Mer, which means, castle of the sea, but, today, it is no longer on the water. Its great landscape once reached to the ocean, but it was parceled out to other family members and other beneficiaries. It was built in 1852 by George Peabody Wetmore and was designed by William Morris Hunt. Chateau-sur-Mer was erected during the first wave of wealthy migration to Newport and it was the biggest home in the town in its time. 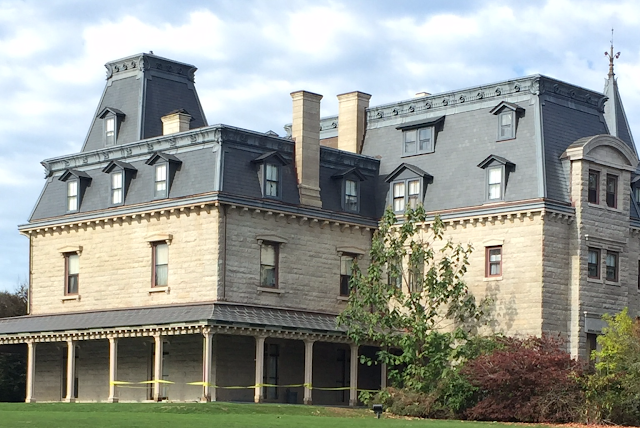 It suffered from some "remodeling" on the second floor by Wetmore's two daughters, Edith and Maude, who never married. It has slowly been restored to give visitors a glimpse of mid-19th century decor.

The Gilded Age may be over a century old, but it'still a time that captivates.  We'll be watching tonight and keeping up our "Gilded Pleasures"!
Posted by Barb's Tea Shop at 8:30 PM 1 comment:

"The Gilded Age" is coming in 2019 and we are so ready! In fact, we've been immersed in this fascinating time period for the past several years in our travels, reading, and, yes, even attire.

According to last Thursday's edition of the New York Times ("The Gilded Age, a Downton Abbey Follow-up. . ."),  Julian Fellows, writer and creator of Downton Abbey, has a new show coming to NBC in 2019. It's a ten-part series set in New York in the 1880's: an era where the nouveau riche began to infiltrate the long-established old money society.

The story will follow the fictional family of George Russell, railroad tycoon and his ambitious wife, Bertha, as noted in Country Living last week.

The Gilded Age saw many new-money families break into society, where barriers to entry were high and controlled with a tight fist by Caroline Astor.  In many "cash-for-class" transactions, rich upstarts would marry off their daughters to Lords across the pond. Seen as a win/win for both sides, the newly minted millionaires would get a title in the family, thus bumping up their social status, and the  strapped-for-cash aristocrats would get an infusion of American dollars to maintain their lavish estates.


If this is ringing as many bells as the downstairs corridor of Downton Abbey, you're remembering this is the story of Lady Crawley (nee Cora Levinson).  It was the Levinson family money that saved Downton Abbey when Cora and Lord Grantham were betrothed. Eventually, though, their story was a happy one, in that love reigned supreme.


However, not all "Dollar Princesses" like Cora Levinson fared so well. The real-life story of Conseulo Vanderbilt proved not all such arrangements were happy.  At the unyielding domination of her mother, Alva, Conseulo was forced to marry the Duke of Marlborough and whisked from her comfortable life in New York and Newport, to Blenheim Castle, one of the largest "homes" in England. The castle was impressive, but in much disrepair as was the relationship from the get-go. Both bride and groom gave up their true loves for an arranged marriage that benefited only their families.


Over the last few years, we've followed Conseulo's journey, visiting the Vanderbilt estates in New York and Asheville (her uncles' abodes), as well as the family "cottage", Marble House in Newport. It was here that Lord Marlborough proposed to Conseulo.

In May, we'll continue the saga when we visit Bleheim Castle. To be sure, we'll be writing up more on the Gilded Age this year, so stay tuned! (We'll also pick up some of the unfinished blog stories from our Newport trip in 2016). 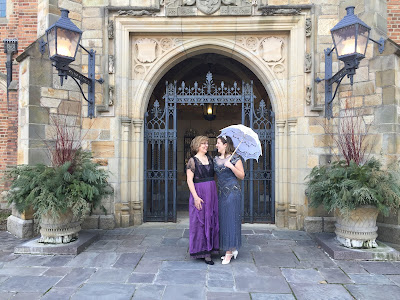 We've also ordered a new Gilded Age dress and pair of gloves, so our wardrobe will readily challenge any closet of the Gilded Age American Heiresses who shopped at Mr. Worth's (well, close enough).

We can't wait until 2019 for The Gilded Age to begin. We've been ready for quite some time.
Posted by Barb's Tea Shop at 1:47 PM No comments: