Chocolate, tea and a little bitter/sweet history was on the menu at the Huntington Woods Library last Saturday.

In connection with the current DIA Exhibit, Bitter|Sweet: Coffee, Tea and Chocolate, Barb's Tea Service hosted: "Tea History with a Tea and Chocolate Pairing" to a "sold out" crowd at the Huntington Woods Library. Teas from Socra Tea were matched with tasting squares from Mindo Chocolate.


Four different tasty teas, ranging from Earl Grey to White Chai, were paired with absolutely delicious Mindo chocolate. Three of the sampling squares were dark chocolate featuring fruits or spices along with one milk chocolate with a hint of peppermint.

In one afternoon, we spanned several centuries and a few continents, covering the introduction of coffee, tea and chocolate to Europe around the 17th century. Although the focus was mostly on tea, we talked about the Royals early adoption of coffee and chocolate and, of course, those amazing chocolate rooms at Hampton Court Palace.

Barb's Tea Service team (aka Rachel and Pam), brewed the tea onsite and served the chocolate. Guests each received a tea and chocolate pairing card and a BTS pen to take notes!

This was an amazing group of guests  and it was a pleasure to linger after the program and talk to everyone. We were introduced to some wonderful new friends and met up with a few of BTS's bff's, including Barb T.

The program ended with a special treat from Newby Teas. Guiliana Loaiza, outreach coordinator for Newby Teas, presented one guest with a special zodiac tea for her birthday. All other guests received a sample tea packet to take home.

A special thanks to Anne Hage, Huntington Woods Librarian, for inviting us to present as well as all the guests who participated!

If you are interested in having BTS prepare a chocolate and tea pairing for your group, contact us anytime at barb@barbsteashop.com or 248-840-4356.  We'd be delighted to create and prepare a special tasting event just for you!

Dining Dos and Don'ts: Etiquette Series with Afternoon Tea begins this month at The Townsend Hotel

Have you ever wondered if there were answers to the dining perplexities cited above? Barb's Tea Service and The Townsend Hotel are here to assist. Starting this month, a delightful and delicious combination of instruction and afternoon tea will be served up at Birmingham's luxury hotel with presenters, Barb and Rachel Gulley.

The first in a series of monthly etiquette programs starts the last weekend in January at The Townsend Hotel. Barb's Tea Service  will instruct guests on proper dining protocol. The course will teach table manners to young people as well as serve as a refresher for veteran social diners.


In truly the most elegant and beautiful "classroom", guests will enjoy the scrumptious sweets and savories from the Townsend. The first program will cover dining do's and don'ts. Future topics will include table talk, finessing the business meal and forms of service.  We'll also slip in a few tea etiquette tips at each event.


Bring your friends and family to afternoon tea at The Townsend Hotel. BTS will present the mini-etiquette programs starting January 29th at noon.

And, yes, there are answers to the questions above. Join us and we'll unlock the mysteries! 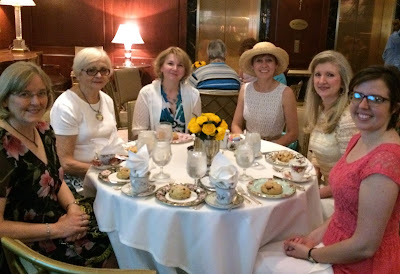 
Barb Gulley, author of this blog, is certified by the Protocol School of Washington in etiquette instruction.
Posted by Barb's Tea Shop at 2:03 PM No comments:

For those of us still looking to fill the void Downton Abbey created last year with its final season, and who have already binge-watched The Crown, it's with great anticipation we have waited for tonight when PBS premieres its new mini-series, Victoria.

It seems absolutely fitting to celebrate this new drama with afternoon tea as it was Queen Victoria's friend and lady-in-waiting, Anna, Duchess of Bedford who is credited with creating this quintessential British repast.

The summer of June, 2011, Rachel and I toured Kensington Palace. We were in awe of being in Queen Victoria's bedroom, the exact spot where, on June 20, 1837, she was told she would be the new reigning monarch of England.

Another highlight of the tour was having afternoon tea at The Orangery, the beautiful tea room on the grounds of Kensington Palace. (It still remains one of our Top Five Tea Rooms in England.) Considering afternoon tea was a creation of Victorian times, it seemed essential to partake in one so near the childhood home of  the Queen.

But what inspired Anna to package up scones, tea and tiny sandwiches into an elegant mid-day event? It began as a solution to a problem. In 19th century England, the span between lunch and dinner for the "one-percenters" was great. By mid-afternoon, our poor Duchess suffered from what she described as a "sinking feeling". Basically, she was hungry.

To combat this, Anna began asking for cakes and breads to be served with her afternoon tea. She loved it - and so much so, she began to invite friends to join her. And, since this was Victorian times where more was more, it became not only a time to break scones with fellow aristocrats, but an occasion to show off your lovely new tea accouterments and fancy tea dresses.

So, my anglophile friends, buckle your seat belts, brew up some Earl Grey, warm up the scones, slather on the clotted cream and get your remote control pointed to your local PBS station at 9:00 tonight. Victoria may not completely fill the empty Sunday nights we've experienced since last March, but served up with scones, sweets and savories, (thank you, Anna!)  it should be delicious fun!


Last November, as part of the Bitter/Sweet: Coffee, Tea and Chocolate Exhibit at the Detroit Institute of Arts, we had the great pleasure of attending a presentation about the chocolate kitchen at Hampton Court Palace from Historic Royal Palaces Food Historian, Marc Meltonville.


When we visited Hampton Court in the Fall of 2015, we saw the chocolate rooms but had no idea they had only recently been uncovered and restored.  Per Marc Meltonville, the general location of the chocolate rooms were known to be somewhere along the Fountain Court, but not until 2013, when a curator found inventory documents, did they find the specific spot.

Hampton Court, located on the Thames. was once the home of Thomas Wolsey, until  Henry VIII took it over in 1514. During the reign of William and Mary, famed architect, Christopher Wren, designed an "addition" which included the Fountain Court.


According to palace records, Thomas Tosier had his own bedroom at the palace. It's telling of the status of being the Royal chocolate maker  - not just your average court minion. Thomas and his wife Grace, from all accounts, lead quite a comfortable life for servants of the King.


In the chocolate kitchen, you can view the original oven and shelves. There are holograms that demonstrate chocolate making.


At the DIA's Bitter/Sweet Exhibit, visitors can see a film of Marc Meltonville (below) at Hampton Court's chocolate kitchen.

It's an interesting (and delicious) part of history. An added treat to meet the Royal Food Historian in person.


Although Marc Meltonville 's presentation was only in November, the Bitter/Sweet exhibit at the DIA continues through March.

In addition, in connection this exhibit, Barb's Tea Service will be presenting The History of Tea with a Chocolate and Tea pairing at the Huntington Woods Library on January 28th.

The new year always brings renewed energy to our to-do lists and personal goals. Ready to shed some of the indulgences of the holidays, it's time to crack open the new planners and embrace 2017. Barb's Tea Service is here to help you stay au courant and navigate the new year with our (almost) annual In/Out List.

Inspired by the Detroit Free Press' In/Out List (2017's Crystal Ball, December 30), we've added our spin to this essential guide. This year is one of extremes, from lavish lifestyles to downsizing, but there's something for everyone!

Downsizing - lucky for us, we're on trend!  Ready for
maintenance-free condo living next month.
(But not far, just two miles down the road!)

McMansions - Not to be confused with Newport Mansions which are very in!

Sherwin Williams' Poised Taupe.  While neutrals may be viewed as humdrum, you have to respect any color that is composed and self-assured.

Generic barnwood -  except in barns

Gilded Age.   The prequel to Downton Abbey: Astors,
Vanderbilts and the other one-percenters of the
era and their "cottages".

Tiny houses: downsizing absurdity. While a 60,000 square
foot cottage is a bit silly, so is a 150 square foot family home.

Gilded or plain, big or small, gray or taupe, Downton Abbey or Downton Abbey, we at BTS wish you a very happy new year and all the good stuff 2017 brings!  (And we're pretty sure toile is still in!)