Where can one experience a boxing match, a 19th Century “Magic Mike” show and a refined afternoon tea with a just-purchased bonnet? Although it sounds like a mash-up of the Las Vegas strip and Colonial Williamsburg, we found all of this last weekend –much to our merriment –at the Fifth Annual Jane Austen Festival in Louisville, Kentucky.

My daughter, Rachel, and I started attending this event in 2009 and then back again in 2010. Last year, we couldn’t make it as Rachel was in London on a study-abroad. I joined her for a week, but, unfortunately, the time conflicted with the JA Festival for 2011. (However, while in England, we did make a trip to Winchester and Chawton, both homes to Jane Austen, so we were, at least, faithful to our July date with our favorite author! - See Jane Austen House in Chawton blog entry for more).

This year, we were amazed at how big the festival has grown and the increase in Austen-attire as well as the number of gentlemen in attendance. Feeling somewhat in the minority, I rushed to purchase a straw bonnet from the Marquette Trading company, a fashion retailer on-site at Locust Grove.

We took in a bare-knuckle boxing match with two fine lads who explained the contrast of the sport from the 1800’s to today. Back in the day, fights were longer, rougher, and, not surprisingly, careers were shorter.

And, much to our happiness, the boxing match was not the end of our macho men show for the day. The long-anticipated “Dressing Mr. Darcy” was next although it could be more appropriately titled “Undressing Mr. Darcy”.  Reenactor Brian Cushing pealed off layers of clothing while describing each article. Starting with the top hat and moving quickly to the jacket, waistcoat and ascot, we experienced 50 shades of Earl Grey as Mr. Darcy slid one suspender and then the other over his broad shoulders. Oh, my where did we leave our smelling salts?
Then, as we circled the shopping district of Meryton once again, Rachel cast her eye on a novel telescope necklace. Truly, a charming little piece that would have served us much better had we bought it before the Mr. Darcy fashion show.

For balanced reporting, I must assert, the JA festival had more than handsome gentlemen to offer (not that there’s anything wrong with that)! We enjoyed afternoon tea in the “tea room” and we were seated with a wonderful group of ladies from the Louisville area. A shout out to Connie and Barbara who shared their travel stories over herbal infusions and chocolate cake.

Back in the village, there were also many old-time craft demonstrations including the making of Turkish paper and hand-crafted lace. We learned with the latter, a shawl of lace in Jane’s time could have equaled the cost of two horses. 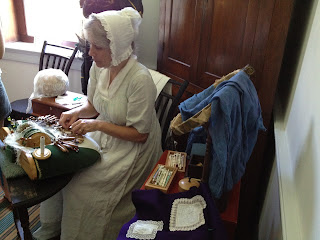 Finally, we had the great pleasure of being introduced to Bingley teas, the creation of Julia Matson whose booth was literally manned by husband and sons. There is a great variety of tea offered from herbals to black and all developed and named for Jane Austen characters. Our current favorite is the Earl Grey. For more on Bingley teas see The Detroit Tea Examiner article, Bingley's Teas:  novel tea at Jane Austen Festival. 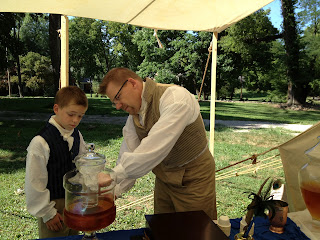 Once again, we departed the historic Locust Grove with a bag full of goodies, a little more Jane Austen knowledge, a few new friends and memories long enough to keep us going until next July. Cheers to JASNA Louisville Regional Coordinator, Bonny Wise, who is the ultimate host and we look forward to seeing more good company in 2013! 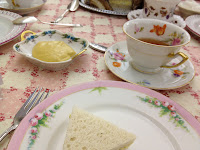 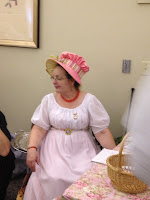 Hot tea on the 4th of July: family fun and most appropriate Boston Tea 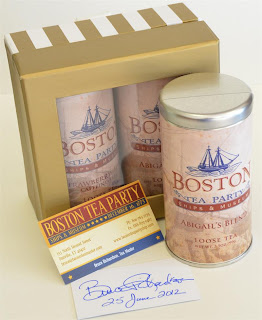 This Independence Day in Michigan, you had no choice but to have hot tea, even iced. With temperatures hovering near the 100 degrees mark, nothing stayed cool for long, including the 20-plus crowd of friends and family that gather each year at my brother Glenn's for a day of food, fun and fireworks.


My brother has been hosting this event for two decades and we've watched the younger set graduate from the wading pool to the large, inflatable watering hole that probably wasn't meant to hold almost half a dozen twenty-somethings (although no one will argue it's refreshing, even at that number). Aside from a dip in the water, we play croquet, basketball, and - my favorite - lawn chair badminton. A low energy game where you can bring your beverage of choice, sit in a chair, swing a racket and believe you are participating in an Olympic-worthy event. Although, easy in execution and exertion, this year's biggest challenge seemed to be how we rotate seatings after the serve. There should be an app for that.


Another treat this year was a surprise visit from my other brother, Ed, who came in from China for the week. (He's been there on business - and, yes, Barb's TEA Shop is going there this fall, complete with tea plantation visits!). Although a bit jet-lagged, he was roused a few times from the comforts of the air conditioned living room to serve as croquet judge - a title bestowed on him several years ago and still intact. Is the ball technically poison if it is still half-way through the hoop? The croquet judge weighs in and there is no appeal - or, better, yet, no app for that.


A day like that deserves a special tea - but what would tea would be most app-ropriate for an event such as this? Before we packed up our veggie tray and homemade chocolate chip cookies and headed to my brother's, I got on-line and ordered the limited edition Boston Tea Party tea gift set from Elmwood Inn. (For more information, see The Detroit Tea Examiner, "Celebrate July 4th with limited edition Boston Tea Party tea"). The deadline for ordering was midnight on the 4th - or until supplies last. I checked the webpage today and didn't see it listed any longer. I'm looking forward to a new tea tasting and will be sure to let you know when my-  Boston Tea Party ship-ment comes in!

Another successful Fourth of July party at my bros with my peeps, and despite the soaring temps, I can't think of a better way to spend the holiday. Here's hoping, though, for next year, the 2012 record temps will be history and historical teas will stay cool for the afternoon!