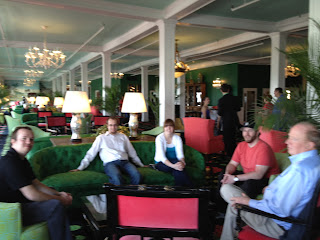 Memorial Day weekend traditionally launches the summer season and gets us thinking of upcoming, relaxing vacations by the lake. In Michigan, add a touch of elegance, and the Grand Hotel epitomizes the warm season getway destination. Throw in an upscale tea time and we here at Barb's TEA Shop, can't think of a better way to spend some time off.

Our family did just that last weekend and we had the great fortune to meet up with historian and hotel concierge, Bob Tagatz. He joined us for tea time and we received a Grand History 101 over English Breakfast tea, scones and champagne. 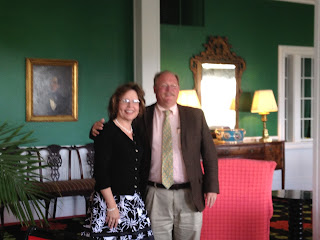 Tea is served daily in the parlor, from 3:30 to 5:00, and the views, both insided and out, are stunningley beautiful. The hotel's interior decor is courtesy designer Carleton Varney. The inside is filled with period furnishings in rich colors of green and coral, against dark green and bright white walls. Looking outside, you see the Grand Hotel's famous, seemingly unending porch, and the calming blue waters of the Straits of Mackinac. 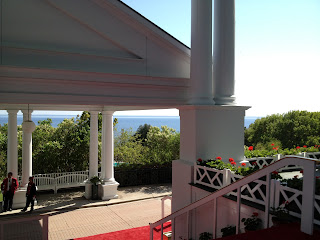 While we were sampling our sweets and savories, with a harpist playing soothing sounds in the background, Tagatz told us some of the Grand Hotel's exciting past. Currently celebrating its 125th year in operation, it has experienced some highs and lows, but with a lot of care and persistence has outlasted most of its kind. Five presidents have stayed along with many celebreties. Asked which celebreties had afternoon tea, Tagatz said two came quickly to mind, Earth Kitt and Rosemary Clooney. (For the younger generation, that would be the original "Catwoman" and aunt of George, respectively.) 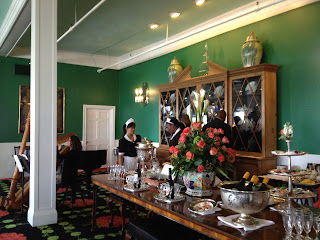 And, as many know, the movie, "Somewhere in Time" was filmed there in 1980 and brought an entirely new group of fans to the majestic hotel. There's an annual Somewhere in Time weekend at the Grand Hotel every October.

A dress code is imposed for dinner, but for afternoon tea guests can be a little more casual. It's elegant, but comfortable and men will enjoy it as much as the ladies. My husband, two sons, and good friend, Jon, expressed what a great time they had (they'd partake in it again in a heartbeat). Of course, the staff of Barb's TEA Shop, Barb and Rachel, ranked the Grand Hotel's afternoon teas as one of their favorites. 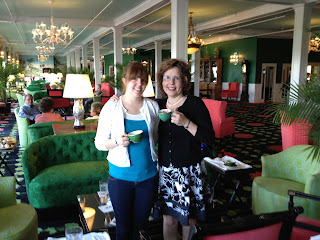 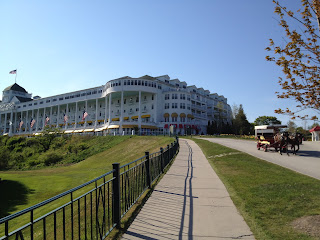 Don't wait too long to go back in time!