Lyme Park: Afternoon tea and tour of the 'real' Pemberley No. One

“You must allow me to tell you how ardently I admire and love you.”

Although that great line was delivered by Mr. Darcy to Elizabeth Bennet, it could easily be applied to how I feel about the real "Pemberley's". I love and admire the two we visited in May: Lyme Park and Chatsworth, both stand-ins for the fictional dwellings of Mr. Darcy in Pride and Prejudice in BBC's 1995 mini-series and the 2005 film version starring Kiera Knightly, respectively.

If a tour of the 600-hundred year old estate, featuring the famous pond that Colin Firth's Mr. Darcy dipped into just before unexpectedly (but oh so delightfully!) running into Elizabeth Bennet, is not enough to admire, throw in afternoon tea and the opportunity to don Regency apparel and one must declare, there is so much to love at Lyme Park in Cheshire, England.


Although the outside of Lyme Park is very familiar to BBC Pride and Prejudice aficionados, we learned the interior scenes of Pemberley were filmed at Lacock Abbey in Wiltshire, the town that became "Meryton" in the same series.


The actual inhabitants of Lyme Park were the Legh family, dating back to the 1400's.

Thomas Legh inherited the estate in 1798 when he was just five years old. During his occupancy, he expanded Lyme to what it looks like today. Descendant Richard Legh, the Third Baron Newton, donated the home to the National Trust in 1948.

We began our particular journey to Lyme Park from our hotel in Windemere in the scenic Lake District of northern England. We learned, to our great dismay, the British GPS works a little differently than in the U.S.


Perhaps with not enough attention to detail, we typed in take over.

As we got nearer to our final destination, while navigating over a dozen roundabouts on a traffic-heavy bank holiday, we realized the terrain was getting flatter and the surroundings a bit more suburban. We were totally confused when we were routed to a townhouse complex where motorcycles lined driveways. This didn't look like the country estate of Mr. Darcy. Just where were we?

I wasn't sure if I was going to LOL or OMG when our GPS declared we had arrived at our destination. I looked up in horror to see the street sign before us -  "Lyme Park" (!) was clearly written in black and white.  We had been directed two and half hours out of our way to a subdivision in North Yorkshire!

I quickly called the "original" Lyme Park to see if I could reschedule our afternoon tea reservation to later in the day. The hostess was so accommodating, she said we'll have it ready whenever you get here.


Sadly, our GPS misstep caused us so much precious time, that we didn't arrive until almost 3:00, just when they shut down the Regency closet. This is the magical place where you can dress in period clothes and then walk the grounds.

However, that was the only disappointment of the visit. The afternoon tea was delicious. You can choose to dine inside, (a space  that once served as the salt storage room but is now a pretty, cottage-style tea room) or outside in the garden.  Since it was such a beautiful day, we chose the latter. And, after that harrowing road trip, fresh air and strong tea were in order.

Thankfully, we still had plenty of time to tour the estate and its interior was beautiful and impressive. It's filled with antiques and decorated in much the fashion you would expect the aristocratic Darcy clan to reside in.

Finally, no trip to Lyme Park is complete without a stop at the pond where Mr. Darcy took his alluring swim.  Like any Colin Firth/Mr. Darcy devotee, I took a stroll about the pond on the chance he may return and emerge again.


Oh, yes, I do declare, there is ever so much to admire and love about Lyme Park!

Stay tuned for more Pemberley love in our next blog and our visit to Chatsworth. 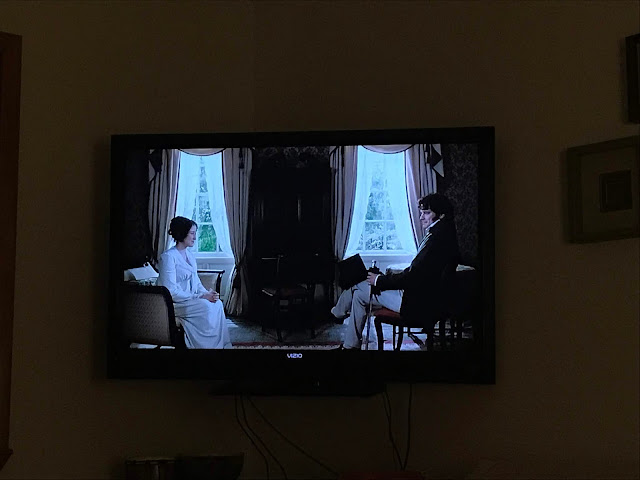 Babington's Tea Room in Rome: Our visit to this English tearoom with Italian flair featured in Tea Time Magazine!

Although tea may not be the first drink that comes to mind when you think of Italy, when we visited last year, we found a few exceptional tea venues including Babington's in Rome.  I had the great pleasure of experiencing a delightful afternoon tea at Babington's last September while interviewing, Chiara Bedini, co-owner of the tearoom, for Tea Time Magazine. The article is in this September/October issue of Tea Time Magazine!

Almost a year ago, I traveled to Italy with  my daughter (and BTS Marketing and Ops Manager), Rachel, and my husband, Chris. We explored Venice, Florence and Rome, the latter being home base for most of the trip. Our hotel was on Via Margutta, a five minute walk from the Spanish Steps and, at it's base, another Roman treasure, celebrating its 125th anniversary this year, Babington's Tea Room and Café. 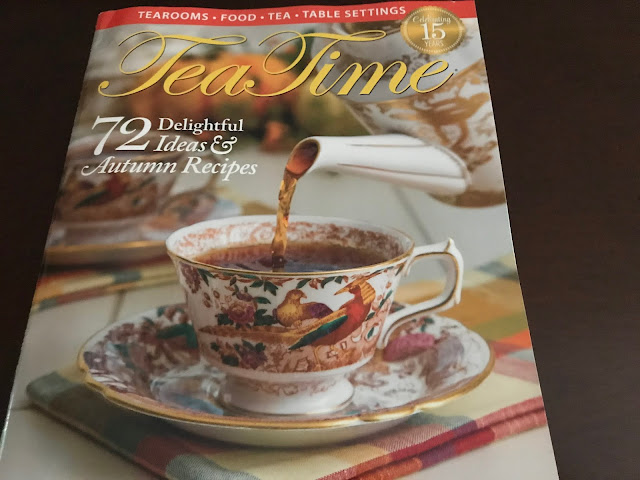 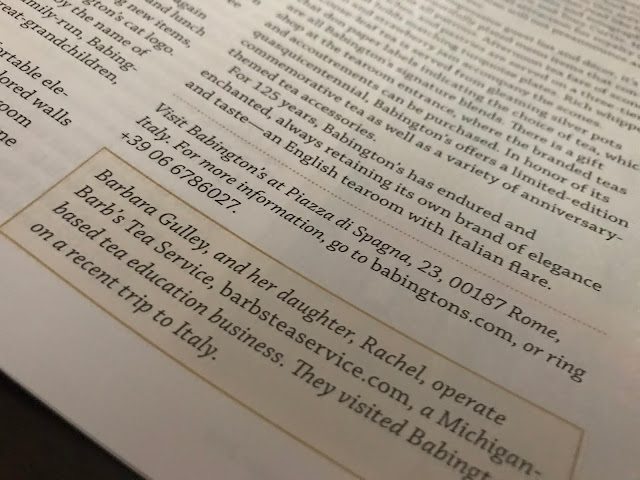 Babington's has a history as rich as it's afternoon tea pastries. The tearoom was the creation of two British expats, Isabelle Cargill and Anna Maria Babington,  who came to Rome to forget the past and seek new adventure.  Their story is told in the most recent issue of  Tea Time Magazine (that you'll just have to get a copy, if you don't already have a subscription, and read about these amazing entrepreneurial ladies). Without too many spoiler alerts, this tea room survived many challenges yet remained a family business throughout the years. Today it's still run by descendants of Isabelle Cargill, cousins Rory Bruce and Chiara Bedini.  It was Chiara who met us last fall and opened the tea room's entrance doors that lead us into this enchanting afternoon tea venue.


Chiara showed us to our table in the front of the tea room and sat with us while we enjoyed Babington's afternoon tea fare and other tasty items on their menu. Our hostess is beautiful - with blonde hair that naturally flips up at her shoulder and frames her elegant features - and could easily be mistaken for some of the celebrities that patronize Babington's.  Chiara told us her grandfather was a director for MGM studios in Italy and she remembered playing with children of famous actors when she was young, including one that became a celebrity herself, Jamie Lee Curtis. 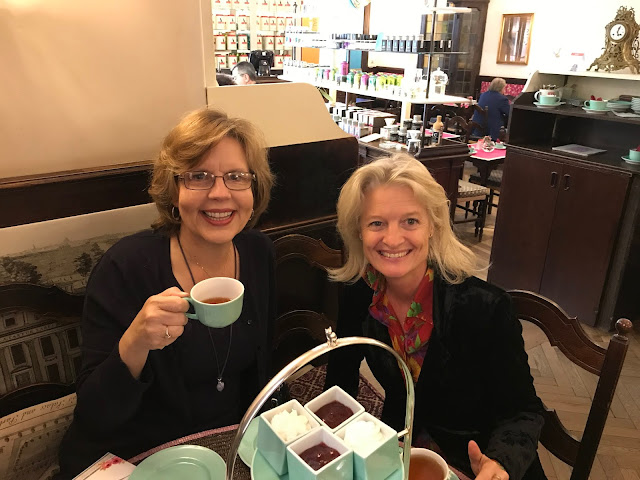 In the back of the tea room, where we met up with Rory, Chiara showed us the guest book where many of the rich and famous have penned their autograph.

We loved the tea room and its tea so much, we stocked up on some of Babington's signature blends, including Roman Holidays, a delicious mix of black teas with rose and vanilla.  We also came back later in the day with friends, Rik and Carol D., who were,  coincidentally, vacationing in Italy and  our stays overlapped by one day. What better way to spend the afternoon with buoni amici than having tea at Babington's? 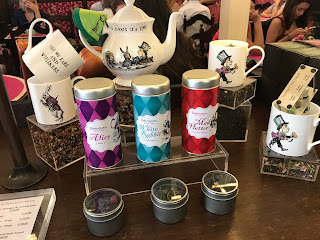 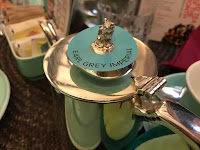 In a meta move this weekend, I took to my outdoor patio, where my souvenir "Via Margutta" sign hangs alongside our front gate, and enjoyed a cup of Roman Holidays while reading the Babington's article in Tea Time Magazine.

We hope you enjoy reading about Babington's as much as we did writing about it.

And, of course, there's LOT more to savor in this edition of Tea Time Magazine.