Morgantown, West Virginia has a lot going for it:  university life, Barney Fife and a delightful tea shop with the name of, not surprisingly,  "The Tea Shoppe".

What is surprising is the impressive tea selection (over 140 blends on the menu) the scrumptious meals, and the Victorian/Vintage-chic décor all tucked neatly and unexpectedly inside the Seneca Center,  an old glass factory turned shopping mall.

Owned and operated by Lisa Biafore, The Tea Shoppe was first thought of as a "fun retirement" endeavor. After 30 years in the corporate world, Lisa and her husband purchased the small tea shop. In the five years since they bought it, they've expanded the footprint and made it truly a family affair with daughters, Gina and Rachel, the latter who puts her culinary training to work as the tea room's pastry chef.  (We at Barb's Tea Service, certainly appreciate a Mother and Daughter tea business!)

Along with my husband, Chris, (specially decked out in bow tie and pocket square), my brother, Ed - who actually found the Tea Shoppe on-line while planning our travel itinerary - and sister-in-law, Sandy, I ordered afternoon tea. The savories, scones and mini-desserts were delicious and beautifully plated.

Although tempted, this visit we didn't don hats, but there are plenty that dot the walls of the tea room which guests are encouraged to try on.

The Tea Shoppe also has several special events throughout the year (there was a "Moana" tea just before we arrived), including tea tastings.

Though this was my first trip to Morgantown, I know it won't be my last. It's a bustling college town (home of West Virginia University) with several quaint shops along main street. If that isn't enough, there's also a statue of Don Knotts, the actor who played the anxious, but lovable, Barney Fife, on the "Andy Griffith Show" (and anxious, but loveable, landlord on "Three's Company"). 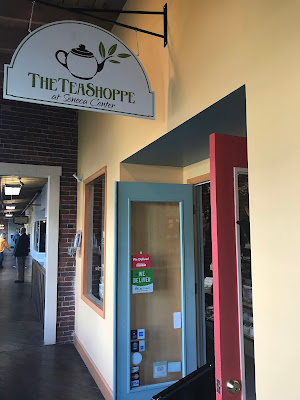 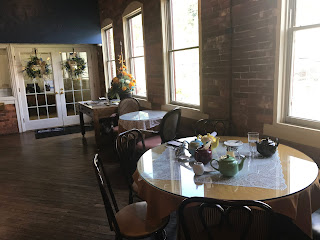 And, of course, we know a great place to have tea in town. The Tea Shoppe in Morgantown is worth the trip!