Happy Anniversary to Harry and Meghan: Rembering our celebration on Fox News and The Townsend Hotel!

May 18, 2018 was a very special day for both Prince Harry and Meghan Markle and for BTS as well. Today marks not only the one year anniversary of the Royal Wedding, but Barb's Tea Service's debut on Fox 2 News followed by a presentation and afternoon tea at The Townsend Hotel in Birmingham.


There are not many occasions where I relish getting up at 4:00 AM, but last year, at this time, I didn't even need an alarm. As part of the Afternoon tea family at The Townsend, I was asked to appear with Assistant Tea Director, Chris Coscia, on a Fox 2 News segment in celebration of Harry and Meghan's big day. That was followed by an Afternoon Tea Talk at the Townsend where we not only discussed tea etiquette, but our royal connections, including our recent trip to England where London was abuzz with excitement and our up-close-and-personal interview  a few years back with Harry's uncle, Lord Charles Spencer.  We also showed off all our fine wedding souvenirs we brought back.

Knowing we'd need to purchase a new hat for the occasion, while in London the week before the wedding, I stopped in Harrods with my husband, Chris, and good friends, Pam and Quint. As unexpected, and somewhat willing consultants, they assisted me in finding the perfect fascinator that met both traveling and budget constraints.


After Harrods, we had twenty-four hours left in London before heading to Southampton to board the Queen Mary II for the ride back home. Even the crew of the cruise ship got caught up in the royal event, posing for a group shot salutation to the soon-to-be bride and groom.

Back home, I had one evening in Michigan before the early morning meeting with my Kelsey Marie Claire, MUA and then off to the studio.

We taped the segment to be inserted later as part of the Royal Wedding coverage. Then, off with Rachel to The Townsend for more celebrating.

It was an awesome day filled with excitement, nervousness, family, luxury and fascinators . . . for BTS.  I hope the same for Harry and Meghan! 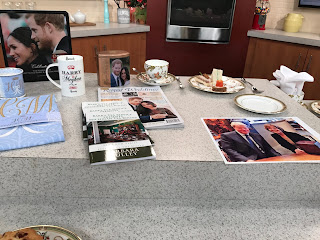 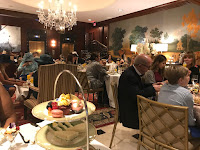